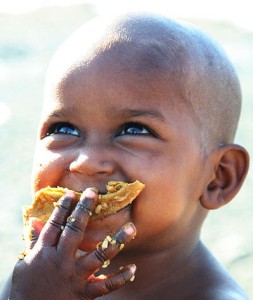 As my daughter approaches her four-month birthday, I have been hearing more and more about starting her on solid foods. Whether it is from well-meaning women my mother’s age telling me a little bit of rice cereal in her bottle will help my daughter sleep through the night or my mom friends enthusiastically asking when I plan to start making my own organic baby purees, I feel like the pressure is on to introduce solids. When I explain that we are planning to wait until at least six months, and possibly longer, there always seems to be some surprise. But this decision should not be surprising.

The World Health Organization (WHO) and the American Academy of Pediatrics (AAP) both recommend that babies breastfeed exclusively until they hit the six-month mark, and these groups have good reasons for doing so. For the most part, babies’ bodies are not ready for solid foods until they are six months old.

Did you know that babies have an “open gut” until around six months of age? The cells in their small intestines are spaced further apart and allow large molecules to pass directly into the bloodstream. While not a problem when baby is getting only breast milk, when you introduce solids, it can allow all sorts of things, including whole proteins and pathogens, directly into your baby’s bloodstream. This ups the risk for baby to get sick or have an allergic reaction to the food. Once baby’s gut matures at around six months, this is no longer an issue. Delaying solids means fewer chances that food will make your baby sick or cause your baby to develop food allergies.

Babies also have something called the tongue-thrust reflex, which begins to go away between four and six months. This reflex helps keep babies from choking, and when it comes to solid food, actually ensures that food is pushed out of the mouth instead of in. To me, this is the equivalent of a “DO NOT ENTER” sign. If a baby’s body naturally pushes food out, then maybe that is a cue that I should be paying attention to: Food is not supposed to go in yet.

A baby’s body is really meant to continue breastfeeding until at least six months. Breast milk continues to be the perfect food, providing babies with all the nutrition they need as well as immune factors that reduce the chances babies will suffer from some common childhood ailments like ear infections.

When it does finally come to introducing solids, an alternative to spoon feeding your baby purees is instead to allow your baby to start eating finger foods when he or she begins showing interest in them, in other words, a baby-led approach. Just as you let your baby decide when to nurse, you can let your baby decide when and what solid foods to start eating. If you allow your baby access to finger foods that are the same as what the rest of the family is eating, he or she will begin to pick up, taste, and eventually eat foods when he or she decides it is time.

Katie is a mom to one daughter, Isla. She writes about cloth diapering, breastfeeding, and balancing work and baby at her blog, Robot Love.