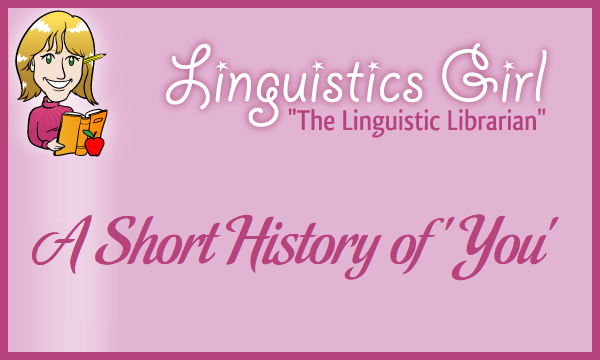 “What’s wrong with you?” posits the Oxford Dictionaries. But, seriously, what’s up with the oddness that is the second person personal pronoun in English: you. Spanish has six ways of referring to you: tú, vos, usted, vosotros, vosotras, and ustedes. German has eight: du, dich, dir, ihr, euch, Sie, Ihnen. Why does English have only you? And has the language ever had more than one second person pronoun?

Unlike Modern English, Old English had three distinct second person pronouns: singular, plural, and dual. As in Modern English, singular means “one” and plural means “not one.” Dual forms, which existed in both first and second person, referred to precisely two people acting as a single unit or in unison, showing a close relationship between the two people. Old English pronouns also exhibited grammatical case: nominative (subject), accusative (direct object), dative (indirect object), and genitive (possessive). Grammatical case refers to inflection of a noun, pronoun, adjective, determiner, or participle that indicates the grammatical function performed by the inflected word. The four forms of the three second person pronouns in Old English are as follows:

The singular translates to “thou,” the dual to “you two,” and the plural to “you.”

During the Middle English period, personal pronouns developed from the Old English pronouns (with the exception of the third-person plural they borrowed from Old Norse). Inflectional simplification occurred, with a gradual merging of the accusative and dative forms, and the distinct dual forms disappeared. Distinct reflexive pronouns also developed.

After the Norman French led by William the Conqueror invaded England in 1066, Norman French, a Romance language, greatly influenced English, a Germanic language. One linguistic feature that Norman French brought to Middle English was the T-V distinction. Named after the Latin pronouns tu and vos, the T-V distinction describes a contrast between various forms of address that distinguish varying levels of politeness, social distance, courtesy, familiarity, age, or insult toward the addressee. In Latin, tu is the informal or familiar second person pronoun (T form) and vos is the formal second person pronoun (V form). T and V forms are examples of honorifics, or forms that encode the relative social status of the participants of the conversation. Use of familiar and formal forms varies. For example, V forms may be used by individuals of lower status when speaking to individuals of higher status. T forms may be used by both individuals in an intimate relationship such as husband and wife or father and daughter.

Prior to 1066, an Anglo-Saxon would have referred to the king with the singular þū “thou.” By the thirteenth and fourteenth centuries, an Englander would have used the formal ye or you. The distinction between thou and ye/you began as one of number (singular versus plural) but developed into one of social status (familiar versus formal). But then an unusual phenomenon occurred: English lost the T form. Ye/you replaced thou in all contexts regardless of rank or intimacy. Perhaps medieval Englanders were excessively polite. In any case, the plural/formal forms of the second person pronouns replaced the singular/familiar forms except among the Quakers. (Quaker founder George Fox felt so strongly about singular you that he wrote a 200-page book on the topic, arguing that singular you violated grammatical rules and enforced unwanted social distinctions.)

As for the objective you supplanting the subjective ye, the merge likely occurred as a result of unstressed vowels. Just as in the twenty-first century, English speakers during the late Middle and early Modern English periods frequently pronounced both ye and you as the unstressed [jə]. Use of you in a subject position is attested as early as the fourteenth century. Some writers continued to carefully distinguish between the two forms while others made no distinction in the nominative. As for Shakespeare, he sometimes even used the two pronouns in the exact reverse, with you in the subject position and ye as an object. By the seventeenth century, you had won out as the second person personal pronoun in all forms, singular and plural, subject and object.

That English has only one second person personal pronoun is certainly a linguistic oddity. Why did a language that once had singular, dual, and plural forms with four grammatical cases each shift to a T-V distinction and eventually merge all the forms into a single word? Consensus is unlikely, so we must accept the fact that you is a pronoun with many hats. If I poke my head into my living room on Christmas morning and ask, “Could you get me some coffee?” am I respectfully asking my mother, intimately asking my husband, or asking all three of my children? Without further context, you could mean any or all of the situations. The biggest confusion that arises with one second person pronoun is singular versus plural. But language changes, and various Englishes have developed plural forms of you. You all, y’all, you’uns, yinz, youse, and even you guys all fill the role of plural second person pronoun. There is nothing wrong with you, but only time will tell whether standard English again gains a distinction in number in the second person.

Baugh, Albert C. & Thomas Cable. 2002. A history of the English language. Upper Saddle River, New Jersey: Prentice Hall.
Honorifics (Linguistics): https://en.wikipedia.org/wiki/Honorifics_(linguistics)
T-V Distinction: https://en.wikipedia.org/wiki/T%E2%80%93V_distinction
What’s wrong with you? The history of a pronoun: https://blog.oxforddictionaries.com/2017/03/28/whats-wrong-with-you-history-pronoun/
Why Did We Stop Using ‘Thou’?: https://www.merriam-webster.com/words-at-play/why-did-we-stop-using-thou
You: https://www.etymonline.com/word/you