Connect
To Top
NewsMarch 4, 2015 This post may contain affiliate links 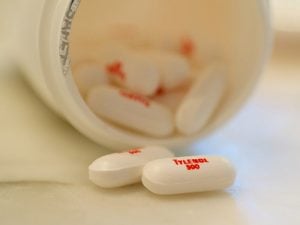 Acetaminophen, or Tylenol, is the most widely used over-the-counter and prescription pain medication worldwide. Although the mechanism behind the painkilling effect of acetaminophen remains largely unknown, recent studies suggest that the drug inhibits the central nervous system from producing prostaglandin. Health care professionals generally consider acetaminophen safer than other nonsteroidal anti-inflammatories (NSAIDs) and opiate analgesics. However, a new study published in the journal Annals of the Rheumatic Diseases suggests that the risks of the medication may have been underestimated.

For the study, researchers from the Leeds Institute of Rheumatic and Musculoskeletal Medicine in the United Kingdom performed a systematic literature review to assess the adverse event (AE) profile of paracetamol, or acetaminophen. Of  a total 1,888 studies retrieved from the Medline and Embase databases, eight cohort studies met inclusion criteria.

Four of the studies found an increased risk of adverse cardiovascular events associated with acetaminophen use, four reported adverse renal (kidney) events, and one found a link with adverse gastrointestinal events.

The researchers do note that the eight observational studies likely contain biases, adding that individuals who take acetaminophen on a long-term basis often have multiple existing medical problems that may require other additional painkillers and medications.

However, despite potential confounding factors and the small number of studies included in the review, the researchers found a consistent dose-response relationship between acetaminophen use at standard doses and the kind of adverse events that are typically associated with other NSAIDs including incidence of mortality and cardiovascular, renal, and gastrointestinal adverse events.

Write the researchers, “While these limitations are important to consider, the striking trend of dose-response is consistent across multiple outcomes and studies.”

“Prescribers need to be aware of patients’ individual responses to [acetaminophen] and the observed increased toxicity with regular and higher dosing within standard analgesic dose ranges.

“Based upon the data presented above, we believe the true risk of [acetaminophen] prescription to be higher than that currently perceived in the clinical community. Given its high usage and availability as an over-the-counter analgesic, a systematic review of [acetaminophen’s] efficacy and tolerability in individual conditions is warranted.”

Paracetamol: not as safe as we thought? a systematic literature review of observational studies: http://ard.bmj.com/content/early/2015/02/09/annrheumdis-2014-206914
Risks of acetaminophen have been ‘underestimated’: http://www.medicalnewstoday.com/articles/290243.php