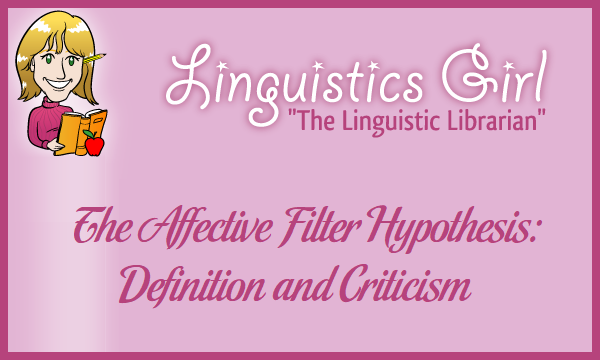 However, in spite of the popularity and influence of the Monitor Model, the five hypotheses are not without criticism. The following sections offer a description of the fifth and final hypothesis of the theory, the affective filter hypothesis, as well as the major criticism by other linguistics and educators surrounding the hypothesis.

Definition of the Affective Filter Hypothesis

Criticism of the Affective Filter Hypothesis

Furthermore, evidence in the form of adult second language learners who acquire a second language to a native-like competence except for a single grammatical feature problematizes the claim that an affective filter prevents comprehensible input from reaching the language acquisition device. As Manmay Zafar asks, “How does the filter determine which parts of language are to be screened in/out?” In other words, the affective filter hypothesis fails to answer the most important question about affect alone accounting for individual variation in second language acquisition.

Although the Monitor Model has been influential in the field of second language acquisition, the fifth and final hypothesis, the affective filter hypothesis, has not been without criticism as evidenced by the critiques offered by other linguists and educators in the field.