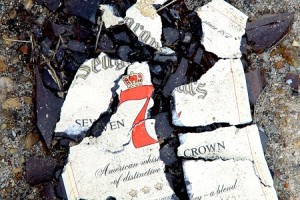 Alcohol during pregnancy is the cause of Fetal Alcohol Syndrome (FAS). Now new research published online in the Journal of Epidemiology and Community Health suggests that drinking alcohol during the first three months of pregnancy increases the risk of giving birth to a premature or unexpectedly small baby.

The Department of Health in the United Kingdom recommends that women trying to conceive and pregnant women abstain from alcohol and consume no more than one to two units per week. A standard drink contains about 14 grams of pure alcohol, which equals 12 ounces of beer, eight to nine ounces of malt liquor, five ounces of wine, and 1.5 ounces of hard liquor.

For the present study, the researchers analyzed responses to food frequency questionnaires by 1,264 women at low risk of birth complications in Leeds who participated in the Caffeine and Reproductive Health (CARE) study. The women answer questions about frequency of alcohol consumption and the type of alcohol consumed at four points in time — in the four weeks prior to conception and in each of the subsequent three trimesters of pregnancy.

Women who consumed more than the recommended one to two units of alcohol per week during the first trimester were twice as likely to give birth to an unexpectedly small or premature baby than women who abstained from alcohol completely. Women who drank the recommended amounts also had increased risk of a premature birth.

In other words, drinking any amount of alcohol during the first trimester of pregnancy increases the risk of giving birth to a premature or unexpectedly small baby.

The researchers conclude, “Our results highlight the need for endorsing the abstinence-only message, and further illuminate how timing of exposure is important in the association of alcohol with birth outcomes, with the first trimester being the most vulnerable period.”

Another recent study on alcohol during pregnancy suggests that women who consume alcohol at moderate or heavy levels in the early stages of pregnancy might damage the growth and function of the placenta.

The best advice is for women who are pregnant or trying to conceive to abstain from all alcohol.

Early pregnancy alcohol linked to heightened premature and small baby risk: http://www.medicalnewstoday.com/releases/273790.php
Maternal alcohol intake prior to and during pregnancy and risk of adverse birth outcomes: evidence from a British cohort: http://www.jech.bmj.com/lookup/doi/10.1136/jech-2013-202934