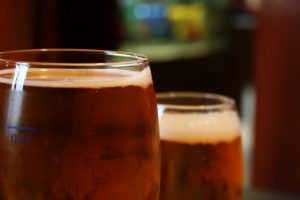 Fetal alcohol syndrome (FAS) is the most well-known risk of drinking alcohol during pregnancy. Now new research from The University of Manchester as published in the journal PLoS One suggests that women who consume alcohol at moderate or heavy levels in the early stages of pregnancy might damage the growth and function of the placenta.

The placenta is the organ responsible for supplying the fetus with oxygen and nutrients through the umbilical cord until birth. Consuming moderate to heavy levels of alcohol reduces cell growth in the placenta.

The present study investigated the effects of alcohol and acetaldehyde on the growth and function of first trimester placenta. Acetaldehyde is a metabolite, or byproduct produced as the body metabolizes alcohol. Acetaldehyde has well established genotoxic effects in humans and animals.

However, the cells that ensure that the placenta attaches to the mother remained unaffected. Lower alcohol consumption — defined as one to two standard drinks — did not effect the growth or function of the placenta.

In addition to reducing placental cell growth, moderate to heavy alcohol consumption also reduces the transport of taurine, an important amino acid vital for brain and physiological development, from mother to baby via the placenta. Alcohol alone, and not acetaldehyde, reduced the transportation of taurine. Reduced taurine has been linked to negative effects on behavior and physical development, suggesting a cause for some neurological symptoms observed in children of alcoholic mothers.

States researcher Sylvia Lui of the Tommy’s Maternal and Fetal Health Research Centre based at The University of Manchester, “Alcohol and acetaldehyde are known to be toxic at high levels, but these results clearly show that levels easily achieved in a normal population have specific effects in the placenta. Placental growth is reduced in comparison to non-exposed placentas, suggesting that in the long-term, there could be consequences to how much support the infant receives from the placenta during the rest of the pregnancy after this exposure.”

Adds Dr. Clare Tower, a consultant obstetrician at Saint Mary’s Hospital part of Central Manchester University Hospitals NHS Foundation Trust, “Though low levels of alcohol did not have a harmful effect, moderate to high levels were damaging. The safest clinical advice would be to agree with the current Royal College of Obstetrics and Gynaecology guidelines and abstain. This is because UK studies show that there is still a lot of confusion in the perception of what alcohol ‘units’ are, as well as a lack of accurate self-monitoring of drinking levels.”

Another recent study found that drinking alcohol during the first three months of pregnancy increases the risk of giving birth to a premature or unexpectedly small baby.