Connect
To Top
BlogFebruary 6, 2013 This post may contain affiliate links

On Saturday, my husband and I took our daughter to the Children’s Museum of Illinois in Decatur, Illinois. With our pass that we had bought the weekend before at the Children’s Discovery Museum, we got into the Decatur museum for free. If you have a children’s museum in your area, I highly recommend buying a family pass. We now have an incentive to get out and explore all the museums in our area for free or reduced admission.

Our first stop at the Children’s Museum of Illinois was the “In My Backyard” toddler area. Designed especially for children under the age of four, “In My Backyard” focused on the sights and sounds that a child might find in his or her backyard. Poppy loved playing with the giant wooden root vegetable garden. She also liked watching her daddy play with the magnetic bug display, although I think that he was more into the bugs than her. 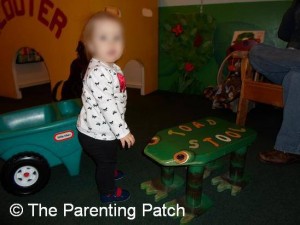 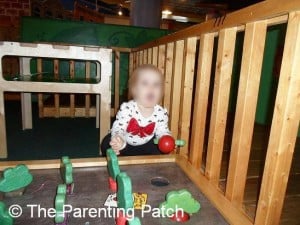 Also in the “In My Backyard” exhibit, Poppy loved playing on the climbing deck that resembled a wooden patio deck or maybe even a tree house. She favorite parts of the climbing deck were the stairs (which she can now walk — yes, walk, not crawl — up and down), the Plexiglas looking holes, and the slide. She especially loved when her daddy helped her slide down the slide again and again and again!

After hanging out in the toddler area for a while, we next headed over to the play grocery store. Poppy really enjoyed pushing the play shopping carts around. She even tried pushing two at once. She also liked the corner windows in the grocery store area, which went all the way to the floor. Right outside the windows were bird feeders. Poppy stood for a few minutes and just watched the birds snacking on seeds outside. 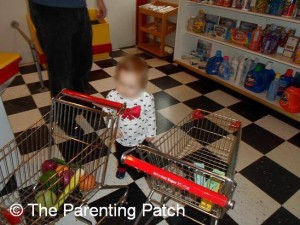 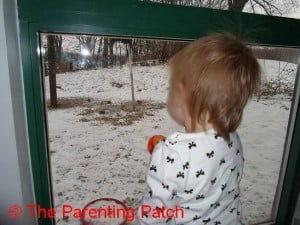 When the birds all flew away, Poppy explored the rest of the museum. She found a fun magnet display and like using the wand to make the metal pieces move around inside the display. I tried taking her up the Luckey Climber, but she got scared again halfway up, although she did smile for her daddy when he tried to take some pictures of her. She is definitely not quite old enough to enjoy the Luckey Climber as much as I do. 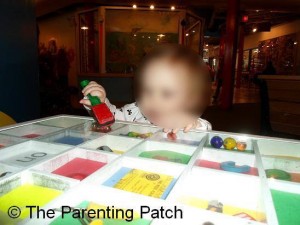 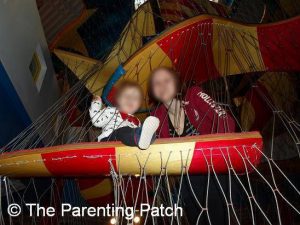 After the failure in the Luckey Climber, we headed up to the second floor of the museum. There Poppy discovered that plastic pin thing in which you push the pins back and forth to make impressions of your hand, face, or anything else. She loved pushing the pins in and having me push the pins back towards her. She also liked just grabbing the ends of the plastic pins in her fingertips. Once she was through with the pin thing, Poppy wandered over to the second toddler area at the museum: the toddler train station. She really loved playing with the toy cars but was not fooled when her daddy tried to talk to her with some finger puppets. She pulled the curtain of the puppet theater back to expose his charade. 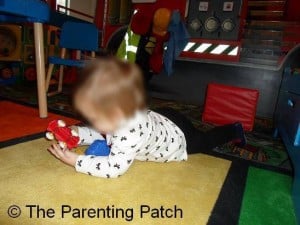 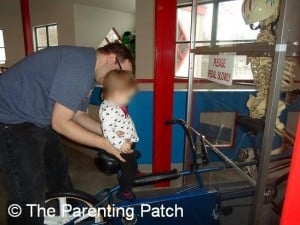 After playing in the toddler transportation area for a while, James took Poppy over to the skeleton riding the bicycle. Poppy thinks that skeletons are hilarious. She loved watching me pedal the one bicycle, which then made the skeleton pedal his bicycle. Although she was too small to reach the pedals yet, she did like when her daddy helped her sit on the bicycle seat. She was also really captivated by the lightning ball in the sensory room on the second floor. When she saw that her hand attracted the electricity, she pulled her hand back and looked at her fingers. I am sure that she thought that she could shoot lightning from her fingertips!

Our final stops in the children’s museum took us back to the first floor. First we visited the toddler area again where James read a book to Poppy. She also played a little while longer on her own. However, as her nap time was approaching and we could see that she was getting tired, we finally took Poppy to the water table exhibit. Although not very easy for her to splash in because of the height of the table, Poppy did enjoy the few minutes that she played in the water. All in all, Poppy had a great time at the Children’s Museum of Illinois. 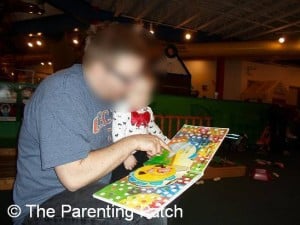 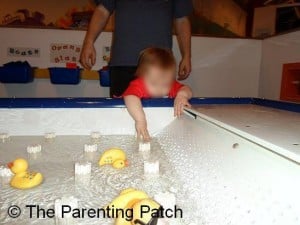 For more information, visit the Children’s Museum of Illinois website.