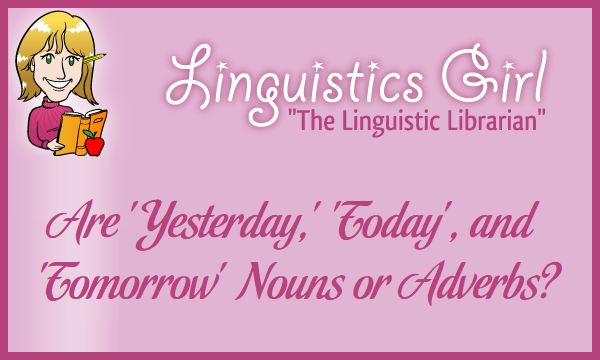 The line between grammatical forms is blurry at best, especially among lexical categories like nouns and adverbs. Closed functional classes like pronouns, prepositions, determiners, and conjunctions that do not readily accept new members are much clearer. But open lexical classes that acquire new members readily and constantly are less distinguished.

The words yesterday, today, and tomorrow can all function as adjunct adverbials. For example:

The internal structures that distinguish nouns from other grammatical forms are number and possession. Prototypical nouns express grammatical number, which is a grammatical category that expresses count distinctions. English nouns are singular or plural. Singular means one. Plural means not one. The majority of English nouns are regular, taking an –s or –es suffix to form the plural. Prototypical nouns also express possession, which indicates a possession of or some other relationship to another word or phrase. In English, the affixation of the possessive clitic (‘s [apostrophe s] or s‘ [s apostrophe]) forms possessive nouns.

The grammatical forms that distinguish adverbs from other word classes are degrees of modification. Prototypical adverbs express three degrees of modification: positive, comparative, or superlative. The positive form is the base form of the adverb. The comparative form expresses a comparison between two entities in quality, quantity, or degree. The superlative form expresses the highest degree of comparison. The majority of adverbs show no inflectional variation, instead expressing three degrees of modification through periphrasis, or the use of separate words to express a grammatical relationship that is otherwise expressed by inflection. Most adverbs use a syntactic system, taking more to form the comparative and most to form the superlative.

Applying syntactic tests to yesterday, today, and tomorrow reveals that all three words are nouns. All three have plural and possessive forms. For example:

In addition to passing the syntactic test for nouns, yesterday, today, and tomorrow can also perform other nominal functions. For example:

Despite the confusion created by the various categorizations in multiple dictionaries, the words yesterday, today, and tomorrow are nouns. All three words have plural and possessive forms, and all three words can perform all ten nominal functions including adjunct adverbial.