Connect
To Top
NewsFebruary 20, 2015 This post may contain affiliate links 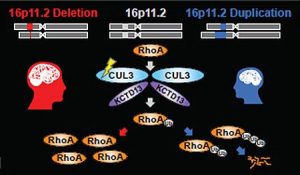 Adding to the growing body of evidence that autism begins before birth, researchers from the San Diego School of Medicine at the University of California have discovered that mutations that cause autism in children are connected to a pathway that regulates brain development.

Autism, or autism spectrum disorder (ASD), is a developmental disorder that manifests during the first three years of life. The disorder is characterized by impaired social interaction and verbal and non-verbal communication and by restricted, repetitive, or stereotyped behavior. Autism currently affects one in 68 children in the United States. Boys are almost five times more likely to suffer from the disorder than girls.

For the present study published in the journal Neuron, researchers led by Lilia Iakoucheva, PhD, assistant professor in the Department of Psychiatry, studied a set of well-known autism mutations called copy number variants, or CNVs, specifically investigating when and where the genes were expressed during brain development.

Comments Iakoucheva, “One surprising thing that we immediately observed was that different CNVs seemed to be turned on in different developmental periods.”

The researchers specifically noted that one CNV located in a region of the genome known as 16p11.2 contained genes active during the late mid-fetal period, ultimately identifying a network of genes that showed a similar pattern of activation including KCTD13 within 16p11.2 and CUL3, a gene from a different chromosome that is also mutated in children with autism.

Explains Iakoucheva, “The most exciting moment for us was when we realized that the proteins encoded by these genes form a complex that regulates the levels of a third protein, RhoA,” adding, “Suddenly, everything came together and made sense.”

Previous studies have found that RhoA levels influence head and body size in zebrafish, an animal that geneticists use to investigate gene functions. Children with 16p11.2 CNV also have enlarged or decreased head sizes and suffer from weight problems ranging from obesity to underweight.

Says Guan Ning Lin, PhD, with Roser Corominas, PhD, “Our model fits perfectly with what we observe in the patients.”

The RhoA pathway was also recently implicated in a rare form of autism called Timothy syndrome, which is caused by the mutation in a completely different gene. Says Iakoucheva, “The fact that three different types of mutations may act via the same pathway is remarkable. My hope is that we would be able to target it therapeutically.”

The researchers now plan to test RhoA pathway inhibitors using a stem cell model of autism. Concludes Iakoucheva, “If we can discover the precise mechanism and develop targeted treatments for a handful of children, or even for a single child with autism, I would be happy.”

Another recent autism genome study revealed that, although researchers previously thought that the genes for autism could be inherited because the disorder tends to run in families, most siblings with ASD have different autism-linked genes.