Disclosure: I received a sample of Baby Butz Cream as part of an advertorial. 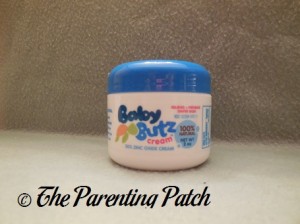 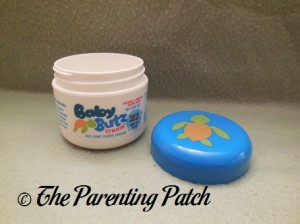 I have tried many different diaper rash creams since the birth of my daughter. Some have worked better than others. I personally have found that ointments that contain zinc oxide work the best for clearing up pesky diaper rashes. Thus, I was extremely excited for the recent opportunity to review Baby Butz Cream.

Made from natural ingredients, Baby Butz Cream is the safest and most effective diaper rash cream available without a prescription. The active ingredient in Baby Butz Cream is zinc oxide. The only other ingredients listed on the jar are corn starch, lanolin, and petrolatum. All four ingredients are known skin protectants and healers. I particularly like that Baby Butz Cream contains no alcohol, chemicals, perfume, or paraben. The ointment is also gluten-free.

When I first opened my jar of Baby Butz Cream, I noticed only a slightly subtle smell from the four listed ingredients. As a mother with sensitive skin, I prefer to purchase unscented products for my daughter when possible. I also prefer to buy more natural products whenever possible. Baby Butz Cream passes both tests with flying colors.

Unlike some other diaper rash creams that I have previously tried on my daughter, Baby Butz Cream is a thick and fairly sticky cream. The consistency means that the stays in place on my daughter after application. Because I use cloth diapers, I do use a barrier between the cream and the diaper. However, unlike other creams, I do not find the Baby Butz Cream all over the barrier at diaper changes. Baby Butz Cream remains on my daughter’s skin in the exact places that she needs protection.

Baby Butz Cream claims to heal most diaper rashes in just six hours and to treat severe rashes in twenty-four hours. My experience with Baby Butz Cream is that the cream heals as fast, and sometimes faster, than promised. When I first applied the cream on my daughter, she had a small red rash from a dirty diaper. At the next diaper change about three hours later, I was pleasantly surprised to find the redness almost completely gone.

The thick consistency of Baby Butz Cream helps with healing time. Other creams smear all over my barrier cloth, especially after ten to twelve hours overnight. With Baby Butz Cream, however, the cream remains on my daughter. When I put the cream on a rash at bedtime, I am confident that the redness will be gone by the morning. Baby Butz Cream really does work to heal diaper rashes quickly!

In terms of price, a two-ounce jar of Baby Butz Cream costs $7.99 while a four-ounce jar costs $12.99. Although a little more expensive than the average diaper cream, the effectiveness of the cream is well-worth the cost. Furthermore, one jar will last a while. I use only a pea-size dollop on my diaper at each diaper change, meaning that I have barely put a dent in my two-ounce jar. A single jar of Baby Butz Cream will last quite a while. 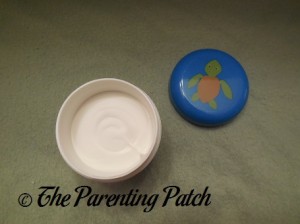 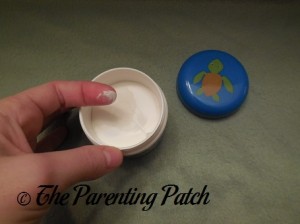 Final Verdict: Baby Butz Cream is my new go-to diaper rash cream for my daughter. I love the natural and limited ingredients as well as the lack of harsh additives. The subtle scent is natural, perfect for babies with sensitive skin. Best of all, Baby Butz Cream truly works to heal rashes quickly and protect skin from future problems. If you are looking for a diaper ointment for your little one, I highly recommend Baby Butz Cream.

I received a sample of Baby Butz Cream as mentioned above for free using Tomoson.com. Regardless, I only recommend products or services I use personally and believe will be good for my readers.