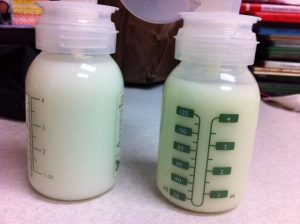 As the saying goes, breast is best. Human breast milk is the nutritionally perfect food for human babies, and researchers in Spain have recently identified all of the bacteria that help make breast milk so good for young children. And the sheer number of bacteria in breast milk is a little surprising!

Previous research from the Sharjah Baby Friendly Emirate Campaign discovered that human milk contains over 100 components of breast milk that cannot be duplicated in the ingredients in formula. For example, breast milk contains less protein and iron than infant formula. However, because babies absorb both nutrients from breast milk more efficiently than from formula, the increased levels of protein and iron in formula are necessary to ensure that formula fed babies receive enough of both.

Breast milk is also superior in carbohydrates and lactose than infant formula. As Dr. Hessa Khalfan Al Ghazal, the Director of the Executive Committee for the Sharjah Baby Friendly Emirate Campaign in Sharjah, explains:

“When it comes to carbohydrate content, breast milk triumphs over formula. It also comes out on top when comparing lactose levels. This lactose superiority is a double-sided advantage, because research has conclusively proved that lactose contributes to the development of a larger brain. This makes breast milk a ‘smarter’ choice — both literally and figuratively.”

Another recent study published in the August 2012 issue of the journal Current Nutrition & Food Science also confirms the superiority of breast milk over infant formula. As discovered by a research team led by senior author William Parker, an associate professor of surgery at Duke University Medical Center in Durham, North Carolina, breast milk promotes the growth of more beneficial gut flora, which are the colonies of friendly bacteria that help absorb nutrients and develop the immune system. Conversely, infant formula does not promote the growth of beneficial bacteria in the digestive tract. Parker explains:

“Only breast milk appears to promote a healthy colonization of beneficial biofilms, and these insights suggest there may be potential approaches for developing substitutes that more closely mimic those benefits in cases where breast milk cannot be provided.”

Previous research has firmly established that breastfeeding significantly reduces diarrhea, flu, and respiratory infections in babies and also lowers the risk of developing allergies, type 1 diabetes, multiple sclerosis, and other diseases later in life. That breast milk promotes the growth of good bacteria is thought to be the reason behind the lowered risk.

Now researchers at the University of Valencia in Valencia, Spain have discovered more than 700 different types of bacteria in breast milk. The researchers also discovered that the microbial diversity in human milk changes as a baby grows. The predominant bacteria in colostrum, the first milk produced by a mother after birth, were Weisella, Leuconostoc, Staphylococcus, Streptococcus, and Lactococcus. Between one and six months, levels of Veillonella, Leptotrichia, and Prevotella bacteria increased significantly.

Furthermore, the researchers also concluded that the mode of delivery and the health of the mother play a role in the diversity of the bacteria in breast milk. Overweight mothers and mothers who gained more than the recommend amount of weight during pregnancy produced milk with less microbial diversity. Mothers who gave birth via a planned cesarean section also produced milk with less bacteria.

As the researchers explain:

“The lack of signals of physiological stress, as well as hormonal signals specific to labour, could influence the microbial composition and diversity of breast milk.”

The results of the studies on the composition of breast milk versus the ingredients in formula may have positive effects on babies who are artificially fed. As Dr. Al Ghazal argues:

“Our role is not to criticize artificial milk for the sake of being negative, but to constructively point out what is best for the baby. The undisputed facts show beyond a doubt that breast milk is vastly superior in virtually every vital area.”

“This could have a long-lasting effect on the health of infants who, for many reasons, may not get mother’s milk.”

As the authors of the Spanish study summarize:

“If the breast milk bacteria discovered in this study were important for the development of the immune system, its addition to infant formula could decrease the risk of allergies, asthma and autoimmune diseases.”

Breast is best, and learning more about the composition of breast milk can help improve the quality of infant formula for babies who otherwise cannot eat human milk.