Connect
To Top
BlogOctober 9, 2011 This post may contain affiliate links 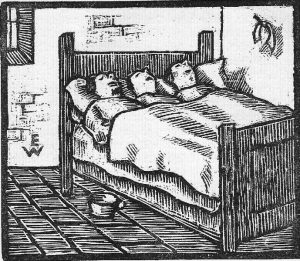 When I was pregnant with my first child, you would have heard me say that I would never put him in the bed with me. I knew all about the “dangers” of bed-sharing, and, to be honest, I didn’t want my precious bed space taken up by another person. The bassinet was ready to go for about two months before I brought my baby boy home.

Fast forward to about two days after giving birth to my nine pound bundle of joy. The labor and delivery was strenuous, but he was worth every second of it. I had never felt such an overwhelming sense of love. My husband and I brought him home and just loved on him, enjoying every second.

I vaguely remember getting ready for bed. I was in a bit of a daze and hopped up on pain killers, so the first few days after the births of both of my children are a bit fuzzy. The nurses showed me how to swaddle my baby boy before I left the hospital, so I swaddled him and fed him a bottle. When I thought he was fast asleep, I laid him down in the bassinet. Quietly, I settled under my own blankets and closed my eyes. Just before I drifted off to dreamland, he started crying. I repeated the process two more times until he finally broke out of the swaddle.

In that moment, I realized if I ever wanted to sleep, I should try bed-sharing. Laying on my side, I scooted close to my son, who was on his back, and sang “You are My Sunshine.” He slept for at least two hours. Since that night, I have been pro-bed-sharing and have let both of my kids sleep with me.

My son slept in our bed until he was twenty-months-old. I had even tried the Cry It Out method on him when he was around six months old with disastrous results. He never slept in a crib. At almost three, he starts the night in his bed and sometimes wants to sleep in our bed around five or six in the morning, and I am just fine with this.

When my daughter was born, I had no reservations about bed-sharing with her. I was determined to nurse her, and the side laying position was the only position that did not cause me much pain during the first couple of weeks. Having her sleep in my bed was essential for nighttime nursings. With a toddler and a newborn, I did not have the luxury of sleeping when the baby slept during the day. Being able to nurse her and doze at the same time saved my sanity. She is just over a year old and does sleep in her crib at times, but she always comes into my bed when she wants to nurse at night.

I know bed-sharing is not for everyone. I was completely against it before having my own children, but I found it was so natural for my babies to want to be close to me and for me to want to be close to them even throughout the night. Bed-sharing must be done safely, and I believe only the mother should be the one sharing the bed with the infant. Dad can be in the bed, too, but it is best if the mattress is placed next to a wall and baby is between the wall and his mom. Also, pillows and blankets should be kept far away from the baby.

I’m a big fan of Dr. Sears, and when I read his article “Co-sleeping: Yes, no, sometimes,” I became even more convinced that bed-sharing was a good thing. Have you ever listened to a newborn baby breathe? It really is kind of frightening to a new mom because they stop breathing periodically and make all kinds of strange noises. Put a newborn next to her mom, close to her face, and baby’s breathing almost instantly regulates. It happened with both of my kids and really helped ease my nighttime worrying about SIDS.

Bed-sharing came naturally for me, and it something that I have enjoyed with both babies. Yes, sometimes I wish they would sleep in their own beds all night, but they grow up too fast, and I know they won’t want to sleep next to me forever.