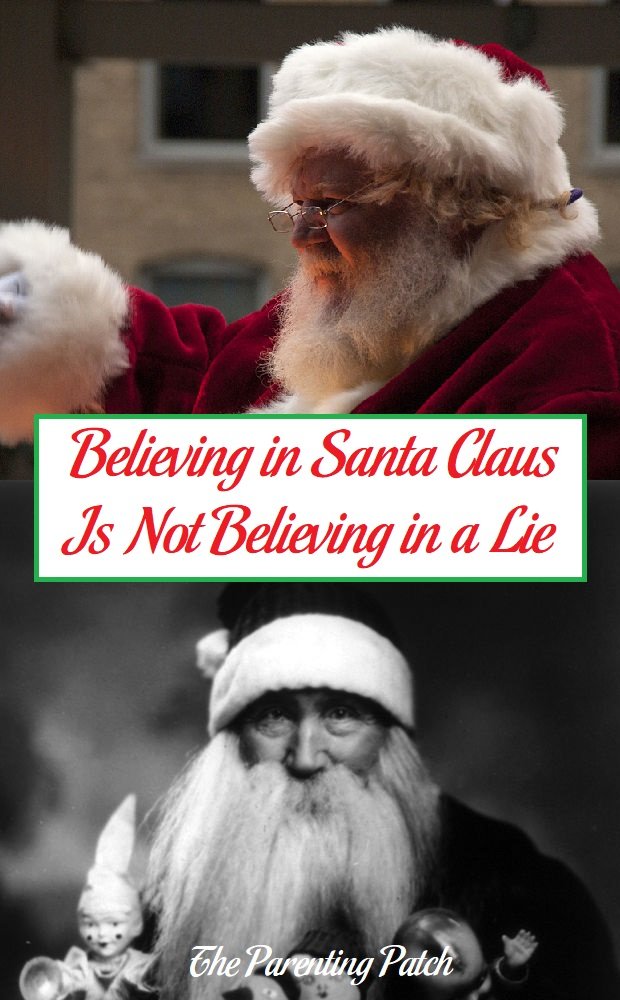 A world without faith and imagination is a sad place indeed. A world without Santa is even sadder. “Is Santa Claus promoting imagination and Christmas magic, or is it just lying to your kids?” once asked a friend and fellow blogger. For me, the question is both easy and complicated to answer. For me, believing in Santa Claus is believing in the magic of Christmas, a childlike magic full of faith.

As a child, I believed in Santa Claus. Every December I looked forward to Santa visiting my house on Christmas Eve to leave me and my brothers presents. We always tried to be on our best behavior during this time of year — even if we got into some naughty behavior the rest of the year. I would count down the days until Christmas Day on my calendar, eagerly awaiting the arrival of Santa Claus on Christmas Eve. I also fondly remember going to get our pictures taken with Santa. We would each take a turn sitting on his lap, and we would whisper to Santa the gifts that we wanted that Christmas. Sometimes we got all the presents we wanted, sometimes not. In either case, our parents made sure that we understood that Santa could not and would not always give us everything our hearts desired.

I also remember watching holiday films during the Christmas season. My favorites were the Rankin and Bass movies like Rudolf the Red Nosed Reindeer, Santa Claus Is Coming to Town, and Frosty the Snowman. Santa was a key character in all of these films. I especially loved learning about the story of Santa Claus: Who he was and how he came to be. As I grew older, I came to realize that a single man could not bring presents to every good little boy and girl on earth in a single night. I also realized that reindeer, as mammals, could not fly despite magic corn. I also learned that the North Pole is a desolate area of icy land and sea, not the charming little village portrayed in Christmas movies.

However, my newfound realizations did not stifle my love of Santa Claus. Knowing that Santa Claus was not really a man who flew around in a magical sleigh with flying reindeer delivering gifts to the children of the world did nothing to quash my Christmas spirit. No, the Santa Claus of Christmas legend is not a real person. Instead, Santa Claus is an embodiment of Christmas spirit and Christmas magic. Even as an adult, I still believe in Santa Claus — just in a different sense. 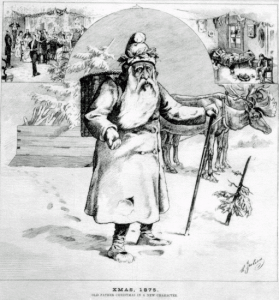 Now that I am grown and have children of my own, I enjoy reading about and learning more about the history of Christmas including the history of Santa Claus. The story of Santa begins with St. Nicholas, a saint born in Parara, now located in present-day Turkey, around the year 280. He was known first for his piety but was best remembered for giving gifts to three young daughters of a poor man who would have otherwise been sold into slavery. By the Renaissance, St. Nicholas had become a favorite saint of nearly everyone. Even after the Protestant Reformation when the veneration of saints was discourage, St. Nicholas remained popular in Protestant strongholds such as Holland.

In the early years of America, Christmas was discouraged by the Puritans and St. Nicholas or any other forefather of the modern Santa Claus were non-existent. Not until the likes of John Pintard, Washington Irving, and other prominent men, many with Dutch ancestry, found a renewed investment in the history of Dutch colonies, particularly in New York City (formerly New Amsterdam), did Santa set foot in the United States. Pintard first promoted the old saint within his own family. Irving subsequently introduced St. Nicholas to a national readership through his quasi-historical History of New York in 1809.

Then in 1822, Santa Claus gained a real foothold in American folklore when Clement Clarke Moore penned a holiday poem for his three children: “An Account of a Visit from St. Nicholas.” In the piece, Moore changed the physical appearance of Santa from a Dutch saint to a “right jolly old elf.” The new Santa carried a “bundle of toys he had flung on his back” and “filled all the stockings” of the children in the house during his Christmas Eve visit. Moore claims to have modeled his St. Nick after a “portly rubicund Dutchman,” and the new American Santa bears little resemblance to the ancient Dutch St. Nicholas — except in his gift-giving. Some sources claim that the real St. Nicholas bestowed his gifts upon the three young daughters of the poor man by dropping gold down the chimney. That the new American St. Nick came down the chimney with a bound possible draws upon previous folklore.

The new Santa Claus continued to grow and gain popularity in American culture in the nineteenth and twentieth centuries. He allowed and continues to allow parents to indulge their children without compromising other American family values such as earning what one receives. As early America grew, so too did the popularity of Santa. Material prosperity grew in the country at the dawn of the Victorian Era, and, yes, Santa became a conduit for consumerism. But the mythical man also embodied parental authority and love. The Santa of the nineteenth century rewarded good behavior with gifts but also disciplined naughty children with an undesirable token such as a rod. As Wendell H. Oswalt, Emeritus Professor of Anthropology at University of California, has suggested, Santa Claus as an American myth “may have been created to counteract the harsh materialism of the newly emerging country.”

By the twentieth century, the American Santa Claus nearly universally became a benevolent old saint who bestowed toys, candies, and other gifts upon the boys and girls of the country. While Santa raises serious religious questions for some, he represents Christmas charity to others. Thomas Nast cemented the American version of Santa Claus with his drawing of the benevolent saint in Harper’s Weekly in 1881: round-cheeked, white-haired and bearded, and dressed in a furry red coat. Others continued adding to the folklore with elements such as a headquarters at the North Pole, a wife, and elf labor. That Santa and his helpers delivered gifts to the nation furthered a romantic notion of American capitalism — even when Santa represented certain values at odds with the current system. Santa represented dreams, hopes, wishes, and beliefs — notions that often fell far from the realities of modern life. 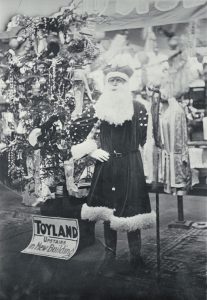 Although created as a story for children, Santa Claus found himself promoted by adults. Parents vouched for his authenticity and furthered the myth. As Oswalt has argued, Santa represents an “idealistic world we have tried to create for small children” and that, by supporting the myth, “we express our own misgivings about the psychological satisfactions derived from our materialistic culture system.” In a culture built on capitalism, a Santa who delivers gifts to the most innocent citizens (children) confirms the belief that equates wealth with goodness. That social and religious notion has diminished a bit since the Victorian Era, but America sadly still gives the poor the side eye, still believing that those living in poverty have somehow chosen their lot in life. Wealth remains an American value, and Santa still plays a role in that value. In fact, one criticism of the modern Santa is that he overshadows the Christmas holiday itself and detracts from the religious significance of the celebration.

As I previously mentioned, neither Christmas nor a gift-bearing saint were part of early Puritan America. Puritans feared that saints might stand in for God and thus excluded saints from their religious system. Over the years, however, Santa Claus became entangled in American Protestantism. In an age that became dependent on reason and scientific proof, Santa became a figure through which Americans could experience spirituality. Believing became seeing rather than the other way around. Santa is an allegory for love and goodness, faith and belief. Santa allows America a childlike faith.

Did I ever feel lied to because my parents perpetuated the myth of a jolly old man in a red suit? Never. Will I continue the tradition of Santa Claus with my children? Absolutely! Believing in Santa is not about believing a lie. Believing in Santa Claus is believing in the magic and spirit of Christmas. As Francis Pharcellus Church told Virginia O’Hanlon in The Sun in 1897: “Yes, Virginia, there is a Santa Claus. He exists as certainly as love and generosity and devotion exist, and you know that they abound and give to your life its highest beauty and joy. Alas! how dreary would be the world if there were no Santa Claus!” I have to agree.