Connect
To Top
BlogJanuary 10, 2013 This post may contain affiliate links

Bitti Tutto by Itti Bitti is a one-size cloth diaper that functions as either an all-in-one or an all-in-two. I am a huge fan of my all-in-two Best Bottom diapers and like my all-in-one Bumkins diaper. I had also heard really good things about Bitti Tutto as an overnight diaper because of the bamboo inserts. In fact, when I had bought my Bitti Tutto, I had been in the process of looking for a better overnight nighttime cloth diaper solution aside from pocket diapers overstuffed with multiple inserts. Thus, I decided to splurge and spent the rather pricey $26.95 on a fuchsia Bitti Tutto. 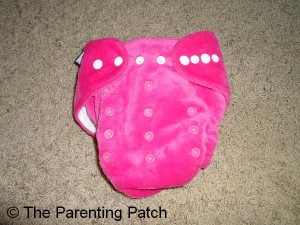 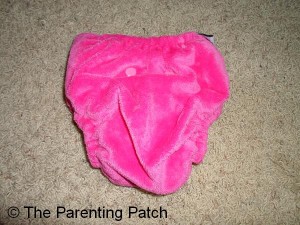 My first impression of the Bitti Tutto is that the exterior minky is incredibly soft. I have owned only one minky diaper before, and I did enjoy the texture. I also really liked the bright pink fuchsia color, which was fun and girly for my daughter. The diaper is also waterproof, so no cover is needed. As far as the look of the diaper goes, the only thing that I am not fond of is the white snaps on the waist. The rest of the snaps match the color of the diaper. I just wish that the waist snaps also matched. The Bitti Tutto also comes in a rainbow of eighteen total colors as well as some seasonal prints. 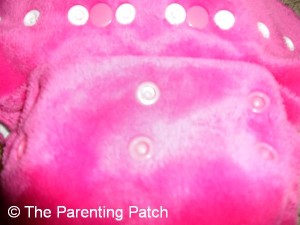 Unlike the majority of cloth diapers available on the market, the Bitti Tutto promises to fit babies and toddlers as small as eight pounds and as large as forty-four pounds. In other words, the Bitti Tutto should fit most young children well past potty training! To adjust the size of the diaper, simply use the four rows of three torso snaps to size the diaper to extra small, small, medium, and large. Right now, my daughter weights about twenty-two pounds, and I have the Bitti Tutto set to the medium setting. I agree that the diaper should last through potty training. However, on my daughter at least, I am skeptical about the forty-four pound claims. 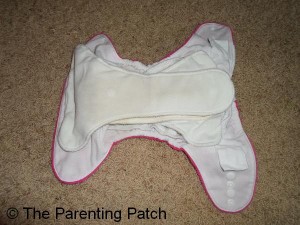 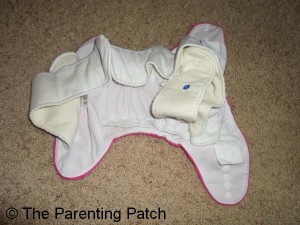 The feature that makes the Bitti Tutto either an all-in-one or an all-in-two diaper is the snap-in inserts. My diaper came with a single set of three bamboo soaker pads. Microfiber inserts are also available, although I would have opted for the bamboo anyway over the microfiber. With the three snap-in inserts, you can customize the absorbency of the Bitti Tutto to suit your baby. When my diaper first arrived, I must admit that I was rather overwhelmed by the inserts. Although the Itti Bitti website offers some suggestions for using the inserts, there is currently no illustrated guide. Even with the written instructions, I am absolutely confused. Pictures showing the different configurations would be so much more helpful. 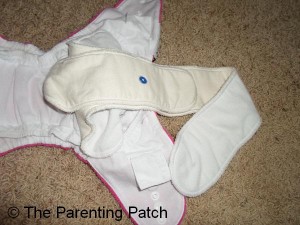 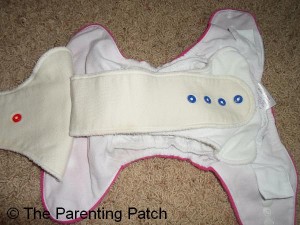 After playing around for a bit, I finally did figure out a configuration for the snap-in inserts that works for my daughter. Because I had decided to use my Bitti Tutto as an all-in-one, I just left the inserts snapped in place when I tossed the diaper in with the rest of my diaper laundry. However, once I took all my clean diapers out of the dryer, I was dismayed to find that the inserts had popped out of the diaper. I have to admit that I was a bit irritated that I had to figure out the configuration of the inserts again. Furthermore, the inserts continue to snap off in the wash and dryer, so the Bitti Tutto is really only an all-in-two rather than an all-in-one. 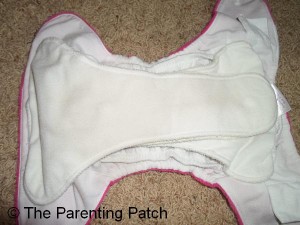 As far as the fit goes, I really like the Bitti Tutto for my daughter. The crotch is slightly narrower than some of her other diapers, which works well for her body shape. I also love the “poo fence” around the interior of the diaper, which is supposed to help keep blowouts from escaping the diaper. And I can attest that the poo fence works great. I put the Bitti Tutto on my daughter when she was sick and having multiple runny poops each day. The poo fence successfully contained all of the nasty poop without a problem. 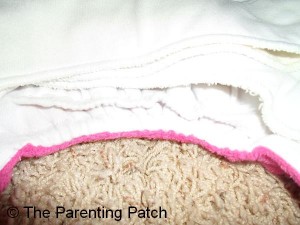 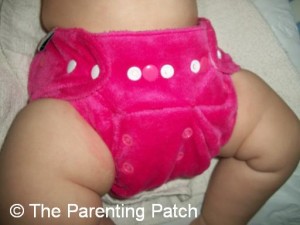 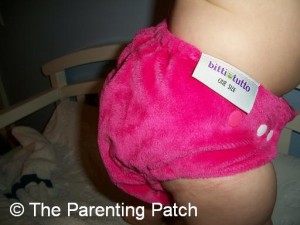