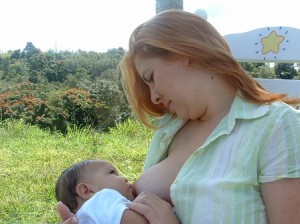 The World Health Organization (WHO) recommends exclusive breastfeeding for all infants up to six months of age followed by continued breastfeeding for up to two years or beyond as mutually desired by mother and baby. Now a new study from researchers in Greece as published in the Journal of Epidemiology and Community Health has linked breastfeeding past six months to better cognitive, language, and motor development.

Although the present study does not prove that breastfeeding is responsible for better development, children who were breastfed for longer than six months did score highest on cognitive, language, and motor development tests as toddlers. Previous studies have also shown physical health benefits from breastfeeding. Breastfeeding may protect against gastrointestinal tract infections, diabetes, respiratory infections, asthma, and obesity in children as well as against breast and ovarian cancer in mothers.

For the present study, Dr. Leda Chatzi from the University of Crete and her colleagues examined data from 540 mothers and their children in a long-term study. Breastfeeding history was gathered when the children were nine months and 18 months old. The children were also given tests of cognitive abilities, language skills, and motor development at 18 months old.

Eighty-nine percent of the children in the study had been breastfed. Of the 89 percent who were ever breastfed, 13 percent breastfed for less than one month, 52 percent for one to six months, and 35 percent for longer than six months.

Dr. Dimitri Christakis — a professor of pediatrics at the University of Washington and director of the Center for Child Health, Behavior, and Development at Seattle Children’s Research Institute who was not involved in the study out of Greece — states:

“I think that the evidence is now of sufficient quality that we can close the book on these benefits and focus instead on how do we succeed in promoting breast-feeding because all of the studies, including this one, that have looked at it have found a linear relationship, which is to say that the benefits accrue with each additional month that a child is breastfed.”

“One of the reasons we see such a big drop off in the United States and elsewhere around four months is because women return to work.

“The real challenge we have is with sustaining breast-feeding. I believe very strongly that we need a public health approach to doing so because these are public health issues – improving child cognition and improving in this case as they showed a child’s physical development, benefits society as a whole and society has to support women achieving that goal.

The results of the Greek study further establish the link between good health, cognitive and emotional as well as physical, and breastfeeding.