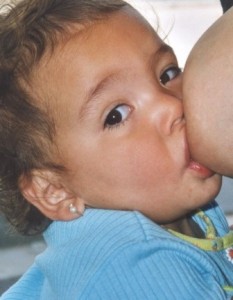 According to a new study published in the February 2013 issue of American Journal of Clinical Nutrition, prolonged lactation is associated with a lower risk of ovarian cancer.

In other words, the longer that a woman breastfeeds, the lower her chances of developing an ovarian tumor or ovarian cancer.

Excluding non-melanoma skin cancer, ovarian cancer is the ninth most prevalent cancer among women. Ovarian cancer is also the fifth leading cause of cancer death for women, largely because only 20% of ovarian tumors are caught early.

According to the Centers for Disease Control and Prevention (CDC), some of the most common symptoms of ovarian cancer include usual vaginal bleeding, pelvic or abdominal pain, back pain, bloating, feeling full quickly while eating, and a change in bathroom habits.

Breastfeeding is thought to reduce the risk of ovarian cancer by delaying ovulation.