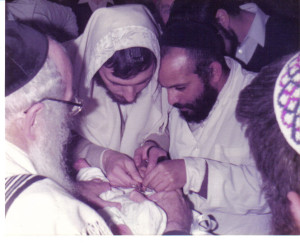 A two-year-old boy who was born at Brooklyn hospital in September died after he contracted herpes during an ultra-conservative religious ritual known as metzizah b’ peh. In the ceremony, the rabbi removes the blood from the circumcision with his mouth, a practice that inherently puts the child at risk.

The unidentified boy died at Maimonides Hospital on September 28, 2011.

According to the boy’s death certificate, he died of “disseminated herpes simplex virus Type 1, complicating ritual circumcision with oral suction.”

While it is not clear at this time who performed the circumcision this isn’t the first time the religious practice has led to death, in 2004 a baby boy died in Rockland County following the same ritual.

Other children have also contracted herpes including three children in 2004 who had circumcisions performed by Rabbi Yitzchok Fischer.