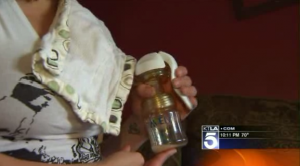 According to federal law, a woman has the right to breastfeed her child and pump her breast milk when and where she needs:

“Among many provisions, Section 4207 of the law amends the Fair Labor Standards Act (FLSA) of 1938 (29 U.S. Code 207) to require an employer to provide reasonable break time for an employee to express breast milk for her nursing child for one year after the child’s birth each time such employee has need to express milk. The employer is not required to compensate an employee receiving reasonable break time for any work time spent for such purpose. The employer must also provide a place, other than a bathroom, for the employee to express breast milk.”

However, a breastfeeding mother in California recently had her rights denied when a manager at her place of employment refused to allow her to pump her breast milk.

Kristen Joseph, 28, claims that her boss at Hennessey’s Tavern in Seal Beach, California refused to give her the keys to the manager’s office at the bar and grill so that she could pump during her shift. As Joseph stated during an interview with KTLA News, the manager also told her that pumping was “disgusting”:

“He said that whether it’s in an office or in the bathroom, I was still in the restaurant and that was disgusting and that people eat here. I went outside and I was freaking out and crying. My co-workers tried to calm me down.”

The young mother usually pumps once for ten minutes during her shift to prevent engorgement and leaking. As she says, “If I don’t pump, then my breasts are very engorged and they hurt and they leak.”

In addition to federal law, the state of California also has a number of laws that protect the rights of breastfeeding mothers:

Cal. Civil Code § 43.3 (1997) allows a mother to breastfeed her child in any location, public or private, except the private home or residence of another, where the mother and the child are otherwise authorized to be present. (AB 157)

Cal. Code of Civil Procedure § 210.5 (2000) requires the Judicial Court to adopt a standardized jury summons for use, which must include a specific reference to the rules for breastfeeding mothers. 2000 Cal. Stats., Chap. 266 (AB 1814) created the law and directs the Judicial Council to adopt a rule of court to allow the mother of a breastfed child to postpone jury duty for a period of up to one year and that after one year, jury duty may be further postponed upon written request by the mother.  See California Rules of Court, Trial Court Rules, Rule 2.1006.

Cal. Health and Safety Code § 1647 (1999) declares that the procurement, processing, distribution or use of human milk for the purpose of human consumption is considered to be a rendition of a service rather than a sale of human milk. (1999 Cal. Stats., Chap. 87; AB 532)

Cal. Health and Safety Code § 123360 et seq. and § 1257.9 require the Department of Public Health to include in its public service campaign the promotion of mothers breastfeeding their infants. The department shall also develop a training course of hospital policies and recommendations that promote exclusive breastfeeding and specify staff for whom this model training is appropriate.  The recommendation is targeted at hospitals with exclusive patient breastfeeding rates ranked in the lowest twenty-five percent of the state. To the extent that funding is available, the law requires the Department of Public Health to expand the breastfeeding peer counseling preogram at local agency California WIC sites. The law also requires all general acute care hospital and hospitals providing maternity care to make available a breastfeeding consultant or provide information to the mother about where to receive breastfeeding information. (2007 Chapter 460, SB 22)

Cal. Labor Code § 1030 et seq. (2001) provides that employers need to allow a break and provide a room for a mother who desires to express milk in private.

Cal. Assembly Concurrent Resolution 155 (1998) encourages the state and employers to support and encourage the practice of breastfeeding by striving to accommodate the needs of employees, and by ensuring that employees are provided with adequate facilities for breastfeeding and expressing milk for their children. The resolution memorializes the governor to declare by executive order that all state employees be provided with adequate facilities for breast feeding and expressing milk.