Connect
To Top
NewsMarch 10, 2014 This post may contain affiliate links 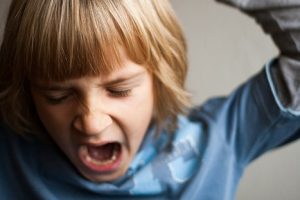 Children who report frequent nightmares may have an increased risk of psychosis, suggests a new study from researchers at University of Warwick in the United Kingdom as published in the journal Sleep. However, parents should realize that nightmares are usually a normal part of childhood.

Nightmares occur during REM (rapid eye movement) sleep and often cause the dream to wake suddenly, full of fear and worry with a fast-beating heart.

Night terrors are another sleep disorder that affect children and that occur during “deep sleep,” usually in the first half of the night. Night terrors are characterized by a more physical reaction than nightmares and often no memory of the experience.

For the present study, the researchers examine the associations between specific parasomnias such as nightmares and night terrors and psychotic experiences in childhood.

The researchers studied incidences of nightmares and night terrors in 6,700 children in the United Kingdom, assessing the children six times between the ages of 2 and 9 years old and following up again at age 12.

According to the study, the likelihood of experiencing psychotic experiences increased with the incidence of nightmares and night terrors. In other words, the more nightmares or night terrors a child experiences, the higher the risk of psychosis.

Other sleep problems such as difficultly falling asleep or waking frequently during the night were not associated with an increased risk of psychosis.

The researchers additionally warn parents to interpret the results of the study with caution. Says study author Prof. Dieter Wolke, “We certainly don’t want to worry parents with this news. 3 in every 4 children experience nightmares at this young age. However, nightmares over a prolonged period or bouts of night terrors that persist into adolescence can be an early indicator of something more significant in later life.”

Adds Lucie Russell, director of campaigns at the children and young people’s mental health charity YoungMinds, “This is a very important study because anything that we can do to promote early identification of signs of mental illness is vital to help the thousands of children that suffer. Early intervention is crucial to help avoid children suffering entrenched mental illness when they reach adulthood.”

Concludes Dr. Helen Fisher of King’s College London, “The best advice is to try to maintain a lifestyle that promotes healthy sleep hygiene for your child, by creating an environment that allows for the best possible quality of sleep. Diet is a key part of this, such as avoiding sugary drinks before bed, but at that young age we’d always recommend removing any affecting stimuli from the bedroom – be it television, video games or otherwise. That’s the most practical change you can make.”