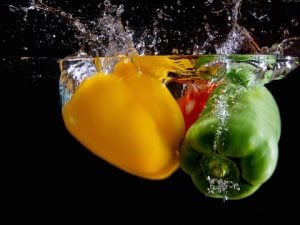 Great news for fans of spicy! New research being presented this week at the annual meeting of the Biophysical Society in Baltimore suggests that capsaicin, the component that produces the spicy heat of chili peppers, may help in the fight against obesity by stimulating energy burning and turning white fat to brown fat.

Explains Vivek Krishnan, a graduate student in the School of Pharmacy at the University of Wyoming, who conducted the research:

“In our bodies, white fat cells store energy and brown fat cells serve as thermogenic (heat produced by burning fat) machinery to burn stored fat. Eating calorie-rich food and a lack of physical activity cause an imbalance in metabolism that leads to obesity.”

Once activated, brown fat can burn up to 300 calories in 24 hours. Previous studies have also found that brown fat may improve insulin sensitivity while helping to control blood sugar and lowering the risk of diabetes and obesity. More simply, more brown fat means more calories burned.

The World Health Organization (WHO) estimates that a staggering one-third of the world population is currently overweight or obese, making ways in which to combat the obesity epidemic a top priority for many researchers.

For the present study, researchers from the laboratory of Dr. Baskaran Thyagarajan at the University of Wyoming including Krishnan used a rodent model to investigate the effects of capsaicin, hypothesizing that dietary capsaicin induces browning of white adipose tissue

and stimulates thermogenesis to counteract obesity.

Through trials with mice, the resarchers found that a relatively low percentage (0.01 percent) of capsaicin in the total high-fat diet prevented weight gain.

“The main goal of our work is to expand the knowledge of the mechanism by which capsaicin antagonizes obesity, as well as to advance the proof of principle of the anti-obesity potential of dietary capsaicin.”

With evidence that capsaicin may help prevent weight gain, the researchers plan to use the findings to develop new drug molecules to prevent and treat obesity.