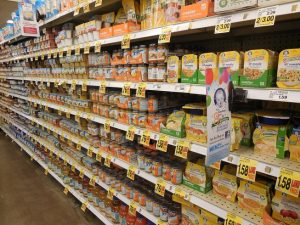 Startling news for parents who feed their infants and toddlers commercially-produced baby foods: A new study from the Centers for Disease Control and Prevention (CDC) concludes that the majority of commercial infant and toddler foods including snacks, desserts, and juice drinks contain high levels of salt or sugar.

For the present study published in the journal Pediatrics, researchers led by Mary Cogswell of the Division of Heart Disease and Stroke Prevention at the CDC sought to evaluate the sodium and sugar content of commercial infant and toddler foods in the United States.

Using a 2012 nutrient database of 1,074 infant and toddler foods and drinks developed from a commercial database, manufacturer websites, and major grocery stores, the researchers evaluated the sodium and sugar contents of each food and determined the presence of added sugars.

According to the study, all but two of the 657 infant vegetables, dinners, fruits, dry cereals, and ready-to-serve mixed grains and fruits were low sodium, and the majority did not contain added sugars.

However, 41 of the 79 infant mixed grains and fruits contained added sugar, and 35 contained more than 35 percent of calories from sugar. Of the toddler dinners, 72 percent were high in sodium, with an average of 2,295 milligrams of sodium per 1,000 kilocalories. Additionally, 32 percent of toddler dinners and the majority of toddler cereal bars/breakfast pastries, fruit, and infant/toddler snacks, desserts, and juices contained added sugar.

High sodium and sugar intake can increase the risk of high blood pressure, which is a risk factor for heart attack and stroke, and can increase the risk of obesity, which increases the risk for other serious health problems such as diabetes, heart disease, stroke, and cancer. That the majority of commercial infant and toddler foods contain high levels of salt and sugar is worrisome.

Introducing children to foods high in salt and sugar early in life may also cause a preference for such foods later in life, further increasing the risk of obesity and related diseases. Limiting the intake of high sodium and high sugar foods may reduce the risk.

Parents should carefully check the labels of commercial baby foods to limit excessive consumption of salt and sugar.

CDC: most commercial foods for infants, toddlers contain too much salt, sugar: http://www.medicalnewstoday.com/articles/288837.php
How Much Sugar Should a Toddler Eat Per Day?: http://www.livestrong.com/article/479749-how-much-sugar-should-a-toddler-eat-per-day/
Sodium and sugar in complementary infant and toddler foods sold in the United States: http://pediatrics.aappublications.org/content/early/2015/01/28/peds.2014-3251.abstract