Connect
To Top
NewsFebruary 2, 2015 This post may contain affiliate links 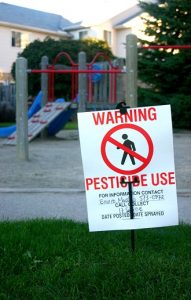 Exposure to the common pyrethroid pesticide deltamethrin during pregnancy may increase the risk of ADHD, says new research published in the Journal of the Federation of American Societies for Experimental Biology (FASEB).

Deltamethrin products are among the most popular and widely used insecticides in the world. Although highly toxic to aquatic life and generally considered safe to use around humans, the popular pesticide remains neurotoxic to humans.

Attention deficit hyperactivity disorder (ADHD) is a behavior disorder characterized by not being able to focus, being overactive, not being able control behavior, or a combination of the three symptoms. Experts estimate that ADHD affects 8 to 12 percent of school-age children worldwide. Boys are three to four times more likely to receive an ADHD diagnosis than girls.

ADHD is a complex disorder with significant genetic contributions. Because no single gene has been linked to a significant percentage of cases, environmental factors also likely contribute to the disorder.

For the present study, Rutgers scientists and colleagues from Emory University, the University of Rochester Medical Center, and Wake Forest University sought to determine an association, if any, between pyrethroid exposure and diagnosis of ADHD.

Using a rodent model, the researchers discovered that mice exposed to the pyrethroid pesticide deltamethrin in utero and through lactation exhibited several features of ADHD including dysfunctional dopamine signaling in the brain, hyperactivity, working memory, attention deficits, and impulsive-like behavior.

The findings provide strong evidence that exposure to pesticides like deltamethrin during pregnancy may increase the risk of ADHD.

In addition to the findings that exposure to deltamethrin increased ADHD-like behaviors, male mice were affected more than the female mice, which reflects the higher rates of the disorder among boys.

The study also analyzed health care questionnaires and urine samples of 2,123 children and adolescents using data from the Centers for Disease Control, National Health and Nutrition Examination Survey (NHANES). By cross-referencing prescription drug history and parental reports of ADHD diagnoses, the researchers determined that children with higher pyrethroid pesticide metabolite levels in their urine were more than twice as likely to be diagnosed with the disorder.

The findings of both parts of the study indicate a need for further studies on pesticides like deltamethrin. Summarizes Richardson, “We need to make sure these pesticides are being used correctly and not unduly expose those who may be at a higher risk.”