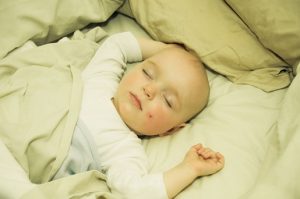 Common childhood infections like colds and the chickenpox are associated with an increased risk of stroke among children. However, routine vaccinations may help decrease risk, suggests preliminary research from three studies presented at the International Stroke Conference 2014 of the American Stroke Association.

Stokes in children are rare but do occur. According to the Centers for Disease Control and Prevention (CDC), 795,000 Americans suffer from a stroke each year, resulting in nearly 130,000 deaths annually. Strokes cost the health care system in the United States $38.6 billion per year.

The present international study, entitled “Vascular effects of Infection in Pediatric Stroke (VIPS),” is a prospective study that examines the association between infections and ischemic stroke. Ischemic stroke is the most common type of stroke and results from a clot that blocks blood flow in or leading to the brain.

Previous research has suggested that minor infections are related to an increased risk of stroke.

States Dr. Heather Fullerton, an author involved with three present studies, “Children who’d had a stroke were most likely to have had a recent infection compared to controls [children without stroke]. There was a particularly strong association for an infection in the week before a stroke, almost a sevenfold increase in the risk of stroke.”

The first study concluded that having an infection less than one week prior to the stroke was linked to a 6.5-fold higher risk of stroke. The most frequent types of infections included colds and other upper respiratory infections, both extremely common infections among children.

The second study found evidence of a recent acute herpes virus in 41 percent of the children who experienced strokes. The most common herpes virus found was herpes simplex 1, which causes cold sores. The chickenpox is also caused by a herpes virus.

Notes Dr. Kenneth Bromberg, director of the Vaccine Research Center and chairman of the department of pediatrics at the Brooklyn Hospital Center in New York City, “These were case-controlled studies looking at people with stroke versus controls — you’re not dealing with the general population. So, it should be noted that although there are strong associations, stroke in children is still a very uncommon thing.”

Explains lead researcher Nancy Hills, Ph.D., M.B.A., an assistant professor of neurology at the University of California, San Francisco Medical Center, “The protective association of routine vaccination against childhood stroke provides a widely available means of prevention, and this information can easily be dispersed by pediatric healthcare providers.”

Although many common childhood infections cannot be prevented with vaccines yet, the chickenpox vaccine is highly effective at preventing chickenpox infections.

However, overall vaccination is also associated with a decreased risk of stroke among children.

Concludes Dr. Fullerton, “Kids who were more vaccinated tended to have lower rates of stroke. It’s one more reason to get your child vaccinated.”