Castile soap is an olive oil based soap made in a style similar to that originating in the Castile region of Spain. The liquid form is made with potassium hydroxide, none of which remains after saponifying the oils into soap and glycerin. Castile soap is considered a vegan product because the formulation uses olive oil rather than animal fats. When recently offered the chance to review a bottle of lavender castile soap from Cove in exchange for my honest opinion, I eagerly accepted the opportunity.

The 33.8-ounce bottle of Cove lavender castile soap currently costs $17.99 on Amazon. Cove also offers an unscented version. The lavender soap contains purified water, coconut oil, potassium hydroxide, argan oil, jojoba oil, hemp oil, lavender oil, olive oil, and vegetable glycerin. None of the potassium hydroxide remains after saponifying the oils into soap and glycerin. All the oils and glycerin are certified organic. The vegan soap does not use animal fats or byproducts and no added detergents or foaming agents. Cove also does not use palm kernel oil because cultivation of the plant leads to the destruction of the rainforests. The multi-purpose soap is meant to be diluted, and the bottle includes some recommended recipes for use. Cove provides a 90-day no-questions-asked satisfaction guarantee. 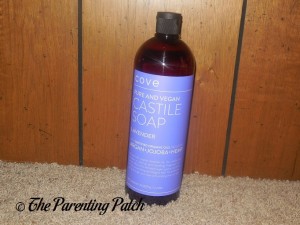 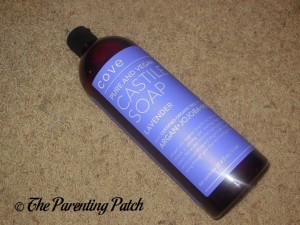 I had never tried castile soap before, but I like to make my own cleaning products for around my house. As soon as I received my bottle of Cove lavender castile soap, I checked out the recommended recipes on the label and decided to first make some body wash. I used a cup of tap water that I had zapped in the microwave and a cup of the liquid soap. I then poured the mixture into a squirt bottle that I keep in my shower. My homemade body wash lathers up nicely and gets me squeaky clean. I especially like using the mixture after working outside in my garden and on my landscaping. The soap effectively cleans away sweat, dirt, bug spray, and any other nastiness that I have accumulated while working outside in the summer heat.

I really like the lavender scent of the Cove lavender castile soap. Lavender is one of my favorite floral scents. Lavender also has a calming effect. I therefore like using my homemade body wash in the evenings to help me wind down after a long day. The equal parts water and soap mixture also makes a great hand soap. The next time that my bathroom hand soap bottle becomes empty, I am going to use some of the castile soap instead of my usual hand soap. You can also use the castile soap to make shampoo, facial cleanser, shave soap, dog shampoo, dish soap, all-purpose cleaner, scrubbing cleaner, laundry detergent, and more. Cove lavender castile soap is incredibly versatile and perfect for pretty much everywhere around the house! 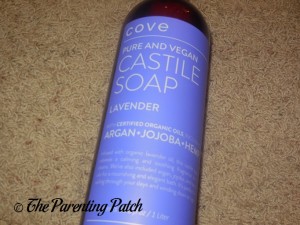 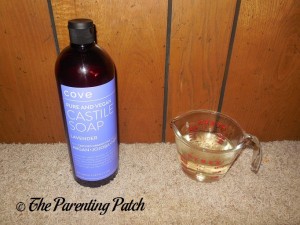 If you are shopping for a vegan soap, I definitely recommend the lavender castile soap from Cove. The 33.8-ounce bottle currently costs $17.99 on Amazon, which is comparable in price to other similar liquid castile soaps. The vegan soap does not use animal fats or byproducts and no added detergents or foaming agents, and all the oils and glycerin are certified organic. The multi-purpose soap is meant to be diluted, and the bottle includes some recommended recipes for use. I love the calming lavender scent, but the soap is also available in an unscented version. I love mixing equal parts water and soap to make homemade body wash and hand soap. Plus the castile soap is versatile and works great for all sorts of cleaning all over the house! Give a bottle of Cove lavender castile soap a try the next time you shop for soap!