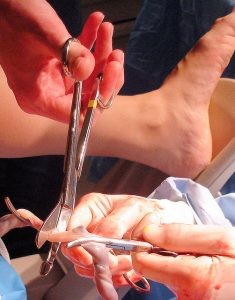 The original study led by Dr. Ola Andersson, a researcher at Uppsala University and pediatrician in Halmstad in Sweden, found that the risk of iron deficiency at age four months was considerably lower in infants whose umbilical cords were clamped and cut three minutes after birth than in infants who experienced early cord clamping (ECC), defined as the removal of the umbilical cord within 10 seconds. The newborns participating in the study were well-nourished babies born after full-term pregnancies to healthy mothers.

Comments Dr. Andersson, “If the cord is left in place for three minutes, the blood continues to flow into the newborn’s circulation. The baby receives about a deciliter of extra blood, which corresponds to two liters in an adult.”

Adds Dr. Heike Rabe, a neonatologist at Brighton & Sussex Medical School in the United Kingdom, in an accompanying editorial, “There is growing evidence from a number of studies that all infants, those born at term and those born early, benefit from receiving extra blood from the placenta at birth.”

Since the 1950s, early clamping has been defined as clamping the umbilical cord before sixty seconds after birth and late clamping as more than five minutes after birth. Because of a series of studies determined that more than 90 percent of blood volume was achieved in a newborn within the first few breaths combined with a lack of recommendations for the optimal clamping interval, the time between birth and cord clamping began to shorten in the middle of the last century.

The World Health Organization (WHO) currently recommends late cord clamping (one to three minutes after birth) unless the newborn requires resuscitation. The American Congress of Obstetricians and Gynecologists (ACOG) states that the ideal timing for umbilical cord clamping has not yet been established.

In low income countries especially, early cord clamping can deprive newborns of an important iron supplement from the umbilical blood, resulting in a particularly serious impact on the development of the child.

“The extra blood at birth helps the baby to cope better with the transition from life in the womb, where everything is provided for them by the placenta and the mother, to the outside world. Their lungs get more blood so that the exchange of oxygen into the blood can take place smoothly.”

The present study describes a four-year randomized clinical trial following up a total of 263 (69%) of the babies from the first study. The researchers investigated the development of the children using IQ and cognitive tests as well as questionnaires completed by the parents.

However, both the tests and the questionnaire responses revealed that children who underwent DCC had slightly better fine motor skills at age 4. The difference became clearer when the researchers looked at sex differences, with DCC exerted the most impact on fine motor skills among boys.

“Right from birth, girls generally have better iron stores, so boys have an elevated risk of iron deficiency. We hope our study will result in new recommendations around the world.”

The current study comes with some limitations, most notably that the study involved a mostly homogenous population in a country outside the United States.

Adds Dr. Scott Lorch, an associate professor of pediatrics at the University of Pennsylvania Perelman School of Medicine and director of the Center for Perinatal and Pediatric Health Disparities Research at Children’s Hospital of Philadelphia:

“We should see whether similar effects are seen in higher-risk populations, such as the low socioeconomic population, racial and ethnic minorities and those at higher risk for neurodevelopmental delay.”

More researcher is also necessary to evaluate the effects of DCC on infants born in distress as breathing difficulties or other problems. Researchers, however, hypothesize that high risk babies often need more blood volume to help with blood pressure, breathing, and circulation problems.

“Also, the placental blood is rich with stem cells, which could help to repair any brain damage the baby might have suffered during a difficult birth. Milking of the cord would be the easiest way to get the extra blood into the baby quickly in an emergency situation.”

Another recent study found that delayed cord clamping by two minutes results in better development for the newborn during the first days of life.