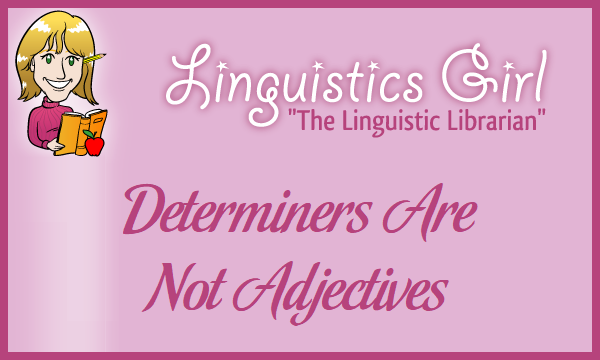 Traditional grammars categorize determiners with either adjectives or pronouns. But determiners are not adjectives. Repeat after me: Determiners are not adjectives. Notional grammars define adjectives as “words that modify nouns.” Adjectives describe attributes of nouns, pronouns, and noun phrases, functioning as noun phrase modifiers, subject complements, and object complements. Determiners provide non-attributive information such as definiteness, familiarity, location, quantity, and number about a nominal form, functioning as determinatives.

First, adjectives show three degrees of modification while determiners do not vary in internal structure. One can have a moist cake, a moister cake, or the moistest cake. The adjective moist has comparative and superlative forms. Determiners do not exhibit morphological change. One can say the cake but not *the-er cake or *the-est cake. Prototypical adjectives express comparative and superlative forms in addition to the positive form. Individual determiners are invariable in form.

Third, determiners are a closed class, and adjectives are an open class. New words are added rarely, if ever, to closed classes. English has a finite number of determiners. New adjectives are added to the language frequently. For example, cromulent and bootylicious, are recent additions to the category of English adjectives. In contrast, the third person plural possessive determiner their is a more recent addition to the category of English determiners, entering the language from Old Norse around the thirteenth century.