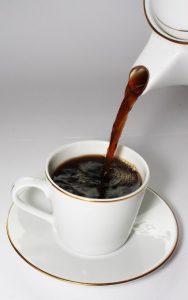 More good news for women with a coffee habit: New research published in the journal Cancer Epidemiology, Biomarkers & Prevention suggests that drinking three to four cups of coffee a day could reduce the risk of endometrial cancer by almost a fifth.

Endometrial cancer, or cancer of the lining of the uterus, is the most common cancer of the female reproductive organs in the United States , affecting 1 in 37 women in their lifetime. Approximately 54,870 women will receive endometrial cancer or uterine sarcomas diagnoses this year, and 10,170 will die from the diseases.

Although the exact causes of endometrial cancer remain unclear, hormonal imbalances, diabetes, obesity, and unhealthy diets are some important factors that increase the risk.

For the present study, researchers led by Melissa A. Merritt, PhD, of Imperial College London in the United Kingdom sought to investigate the ways in which dietary factors affect the risk of endometrial cancer.

Using data on more than 456,000 women from the European Prospective Investigation Into Cancer and Nutrition (EPIC) Study and the Nurses’ Health Study (NHS) or Nurses’ Health Study II (NHSII), the researchers evaluated the dietary habits of more than 2,800 women diagnosed with endometrial cancer. The women participating in the studies completed dietary questionnaires.

In other words, drinking coffee appears to reduce the risk of endometrial cancer.

“We were not surprised by the results that a high versus low intake of coffee was associated with a reduced risk for endometrial cancer, because they were consistent with what has been observed in previous studies.

“We used similar methods to investigate the association between coffee intake and endometrial cancer as previous studies. This is important so we can compare results across different studies.”

“Coffee intake is worth investigating further to see if coffee can be used for the prevention of endometrial cancer.

“However, before clinical recommendations can be made, further studies are needed to evaluate this question in other studies and to try to isolate the components of coffee that may be responsible for any influence on endometrial cancer.”

The findings of the present study validate other research that shows coffee provides a beneficial effect in decreasing endometrial cancer. However, additional research is still necessary to confirm the link.

Another recent study found that drinking coffee could reduce the risk of melanoma skin cancer by 20 percent.