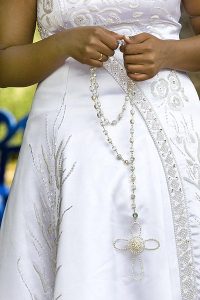 The marriagable age, that is the age at which a person can legally be married, varies from country to country and in some cases state to state. Now a new study suggests that the marriagable age factor plays a part in maternal and infant mortality rates.

The study conducted by Anita Raj, PhD — a professor in the Department of Medicine in the University of California, San Diego School of Medicine — and Ulrike Boehmer, PhD — an associate professor in the Boston University School of Public Health — specifically addresses the link between when a child bride is married and the heightened risks she faces for maternal and infant mortality.

Published in the journal Violence Against Women, the study examines marriagable age through ecological analysis and through other statistical data. The study concludes that marriage before the age of 18 causes a higher rate of premature death in both mother and child.

The study reveals that minors who are wed are more likely to bear children before turning 18 years old. The young age of birth often means a higher risk for complications during labor, low birth weight in infants, and, in many cases, malnutrition for mother and child.

The study also notes that young brides often suffer from HIV in countries where child marriage is commonplace.

What’s more troublesome is that, while child marriages are declining in most parts of the world, they still sit around 70% of females in South Asia and sub-Saharan Africa. Most affected are girls in rural and impoverished areas where access to healthcare is limited.

According to the United Nations, approximately 60 million young teen and prepubescent girls are married off before turning 18.