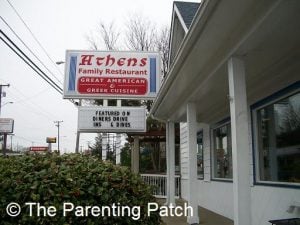 When I suggested that we take a weekend trip to Nashville to introduce Poppy to her uncle, James was especially excited about all the great food that he would get to try while in the city. In particular, he was excited about going to a little diner called the Athens Family Restaurant that had been featured on the Food Network show Diners, Drive-ins, and Dives. The Athens Family Restaurant is a family restaurant that serves traditional Greek and American cuisine. James wanted to try the food because Guy Fieri raved about the burgers and other Greek treats on Diners, Drive-ins, and Dives.

As we drove into Nashville on Saturday afternoon, our first stop was the Athens Family Restaurant. Located not too far off the interstate, the diner was not too difficult to find. The first thing that I did when we arrived was to snap a picture of the sign out front that boasted about the restaurant being featured on Diners, Drive-ins, and Dives.

I was completely surprised when we walked in the front door. The restaurant was packed! I was surprised because we had arrived in the middle of the afternoon, which was not usually a busy time at most restaurants, being between the lunch and dinner crowds. We had about a ten minute wait to be seated. I will say that the clientele at the Athens Family Restaurant has no bearing on the quality of the food. The family in front of us was extremely rude. All three people continued to take over the bench in the lobby despite my having a family and the man waiting behind us being on crutches!

When we sat down to eat, I immediately started looking at the traditional Greek items on the menu. I quickly settled on the gyro platter. I love gyros and am always trying the dish at various family restaurants. James picked a burger that was made out of lamb and beef and which was basically a gyro in burger form. He knew that he had wanted the burger before we sat down because the dish had been featured on Diners, Drive-ins, and Dives. 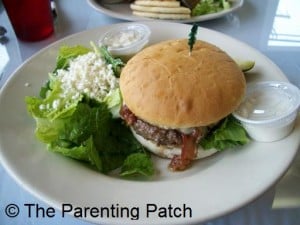 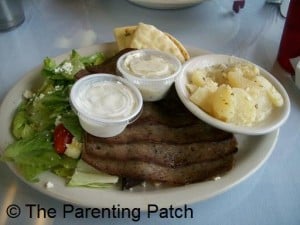 Our food arrived quickly and was absolutely delicious! The lamb and beef gyro meat on my platter was the most tender gyro meat that I have ever eaten. The creamy potatoes that came as my side dish were delectable. James really enjoyed his burger too. He was glad that he had opted for the burger instead of a gyro platter, which had been his second choice. We gobbled our lunches down pretty quickly.

My only complaint about eating at the Athens Family Restaurant was the other rude customers. Not only were the people waiting in front of us rude about taking over the entire bench, but, despite the restaurant being packed and there being a line of people waiting to be seated, another customer sat alone at a table for four and continued reading a book after finishing his meal. How rude! I am all for having a leisurely meal while reading a book but not when the restaurant is packed and other people are waiting to eat. 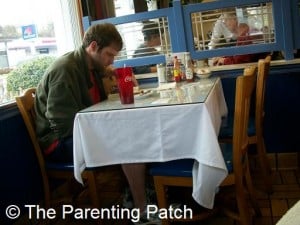 However, despite the other rude customers, I loved my meal at the Athens Family Restaurants. James did too. Should we ever get back to Nashville (and I am sure that we will), we will definitely try to get back to this little Greek diner. Yum!