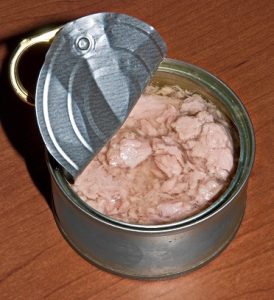 Fish is a lean, low-fat protein that is high in omega-3 fats as well as vitamin D and selenium. Despite some concerns about mercury, I ate tuna and other fish quite frequently for the omega-3 fatty acids while pregnant with my son. Now a new study published in the American Journal of Clinical Nutrition suggests that the developmental benefits of eating fish during pregnancy may offset the mercury-related risks.

Mercury is a naturally occurring element that is found in air, water, and soil. Exposure to mercury can cause toxic effects on the nervous, digestive, and immune systems and on lungs, kidneys, skin, and eyes. Fetuses are most susceptible to developmental effects from exposure to mercury in utero.

Last summer, a report from Consumer Reports advised pregnant women and children to avoid all canned tuna due to inconsistent mercury levels. The American Pregnancy Association (APA) recommends pregnant women consume no more than six six-ounce servings a month. Both the Food and Drug Administration (FDA) and the Environmental Protection Agency (EPA) recommend the consumption of twelve ounces of low mercury fish per week for all individuals including pregnant women. An FDA/EPA review panel concluded that the health benefits of eating fish outweigh potential harmful effects of mercury.

Now a partnership between the University of Rochester Medical Center in New York, Ulster University in Belfast in the United Kingdom, and the Republic of Seychelles Ministry of Health and Ministry of Education that yielded the Seychelles Child Development Study appears to confirm that the benefits of eating fish during pregnancy outweigh the potential risks.

The Seychelles Child Development Study Nutrition Cohort 2 is an observational study in the Republic of Seychelles, a population that consumes a diet high in fish. Of the 89,000 residents of the islands, a total of 1,265 mother-child pairs with complete data participated in the present study.

To measure levels of prenatal mercury exposure, the researchers collected hair samples from the mother during pregnancy. The researchers then assessed the development of the children using a variety of communication skills, behavior, and motor skills tests beginning at age 20 months and following the children into their 20s.

According to the study, prenatal mercury exposure was not associated with lower test scores. The researchers also did not find a link between eating fish during pregnancy and impaired neurological development among children or young adults.

Omega-3 fatty acids (ALA, DHA, EPA) are essential fatty acids required to maintain the health of the body including maintaining normal metabolism and for the visual and neurological development of babies. Fish is an excellent source of omega-3s.

The findings support the hypothesis that the omega-3s in fish counteract the inflammatory effects of mercury.

“These findings show no overall association between prenatal exposure to mercury through fish consumption and neurodevelopmental outcomes. It is also becoming increasingly clear that the benefits of fish consumption may outweigh, or even mask, any potentially adverse effects of mercury.”

“This research provided us the opportunity to study the role of polyunsaturated fatty acids on development and their potential to augment or counteract the toxic properties of mercury. The findings indicate that the type of fatty acids a mother consumes before and during pregnancy may make a difference in terms of their child’s future neurological development.”

Concludes Philip Davidson, PhD, the principal investigator of the Seychelles Child Development Study, a professor emeritus at the University of Rochester and senior author of the study:

“It appears that the relationship between fish nutrients and mercury may be far more complex than previously appreciated. These findings indicate that there may be an optimal balance between the different inflammatory properties of fatty acids that promote fetal development and that these mechanisms warrant further study.”

Eating fish during pregnancy appears beneficial to development because of the high levels of omega-3 fatty acids in fish despite the potential harms of mercury exposure.