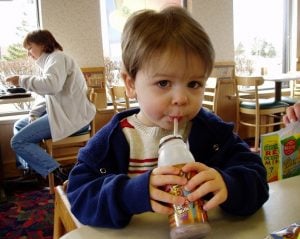 Many children prefer chocolate milk over plain milk. My own daughter loves the occasional chocolate milk as a special treat. However, recent concerns about added sugar have resulted in many school programs removing flavored milk from menus. Now a new study from Canada concludes that total milk intake among children decreases when schools eliminate chocolate milk.

Because of the growing obesity epidemic and concerns about added sugar, many schools have eliminated flavored milks such as chocolate milk from school menus, leading to concerns about decreased milk intake.

For the present study published in the journal Applied Physiology, Nutrition, and Metabolism, researchers at the University of Saskatchewan in Canada sought to measure milk consumption. both plain and flavored, by children in an elementary school environment and to investigate factors contributing to milk choice.

Students in grades five through eight also completed Beverage Frequency Questionnaires to assess usual beverage consumption. The researchers also performed focus groups with the fifth through eighth graders to determine the influences on beverages choices including whether or not students drank milk.

According to the study, total milk intake decreased by 12.3 percent upon eliminated chocolate milk, from 26.6 percent to 14.31 percent.

As the researchers conclude, eliminating chocolate milk from school menus significantly decreases total milk intake. Although schools have largely removed flavored milks because of concerns about added sugar, the researchers suggest that policies should be in place to promote drinking milk rather than limiting the beverage. That rural and low income students consume the most milk further adds to questions about removing chocolate milk from schools.