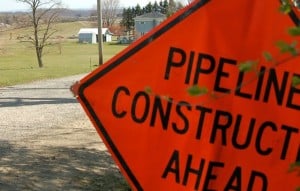 The use of endocrine-disrupting chemicals, or EDCs, during the controversial oil and natural gas drilling technique called hydraulic fracturing, or fracking, can cause infertility, cancer, and birth defects, says new research accepted for publication in the journal of the The Endocrine Society Endocrinology.

Fracking is a controversial mining technique that uses pressurized liquid to fracture rocks below ground. Opponents of the technique cite negative environmental and health impacts.

Many of the chemicals used for the fracking process are EDCs. EDCs are chemicals that can interfere with the normal functioning of the endocrine system. Exposure to EDCs through food, air, soil, and water has been linked to infertility, cancer, and birth defects. Common EDCs include pharmaceuticals, dioxin and dioxin-like compounds, polychlorinated biphenyls, DDT and other pesticides, and plasticizers such as bisphenol A.

Susan C. Nagel, PhD, — one of the study’s authors from the University of Missouri School of Medicine — explains, “More than 700 chemicals are used in the fracking process, and many of them disturb hormone function. With fracking on the rise, populations may face greater health risks from increased endocrine-disrupting chemical exposure.”

The present study investigated 12 suspected or known endocrine-disrupting chemicals used in natural gas operations. The researchers measured the ability of the EDSs to mimic or block the effect male and female reproductive hormones in the body.

In order to gauge the level of endocrine-disrupting activity from sites of natural gas fracking operations, the researchers took surface and ground water samples from drilling spill and accident sites in the drilling-dense area of Garfield County, Colorado. The researchers also took samples from drilling-sparse control sites without spills in Garfield County and Boone County, Missouri.

“Fracking is exempt from federal regulations to protect water quality, but spills associated with natural gas drilling can contaminate surface, ground and drinking water. We found more endocrine-disrupting activity in the water close to drilling locations that had experienced spills than at control sites. This could raise the risk of reproductive, metabolic, neurological and other diseases, especially in children who are exposed to EDCs.”

The results of the present study indicate that fracking opponents do have cause for concern about the controversial mining technique.