The English Speaker That Used the ‘Wrong’ Relative Pronoun: Subordinating with Who and That 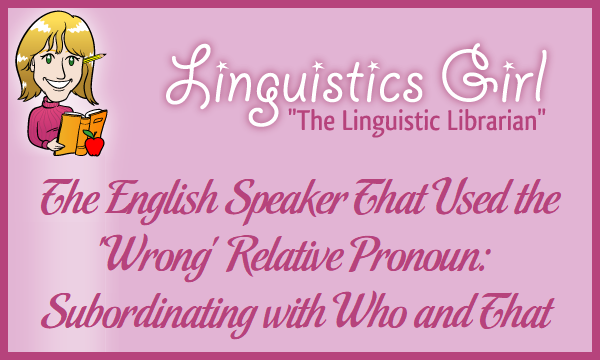 Etymology of Who and That

The shouting in support of that as a relative pronoun for people intensifies when we take a look at the OED definitions for the two words. The word who as a relative pronoun is defined as a “simple relative (of a person or persons), introducing a clause defining or restricting the antecedent and thus completing the sense.” In other words, who is a subordinating conjunction that introduces an adjective clause that describes a person or people. For example:

The word that is similarly defined as a “general relative pronoun, referring to any antecedent, and used without inflexion irrespective of gender, number, and case” that “[introduces] a clause defining or restricting the antecedent, and thus completing its sense.” However, the OED goes on to add that that is used when “referring to persons or things.” Things. Okay. But, persons?! Only who can be used with persons…right?

The Flexibility of That

As every English major knows, the Oxford English Dictionary is the go-to source for word definitions and etymology. So, although, yes, who should only be used for people, that can clearly be used for both things and people. Unlike who, which is really used only for people (the table who seats six just sounds strange), that is relatively flexible. As I mentioned before, the use of that for people or things really depends on style. I might say to my husband in casual conversation “The neighbor that lives two houses down…” but would only ever write about the neighbor who lives two houses from my own.

So, the next time that annoying grammar know-it-all rattles off the rule about “who is for people, that is for things,” be the English speaker that sets them straight. Even the Oxford English Dictionary agrees that that refers to people or things.