Evidence for the Death of the English Case System 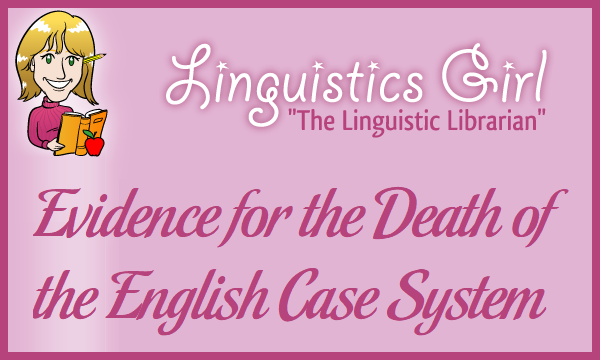 Of the following eight sentences, which contain grammatically possible uses of English pronouns?

Many readers will undoubtedly proclaim that only sentences one, three, five, and seven are grammatically correct. “Why?” I will ask, to which I will receive the answer, “Because only subject pronouns can be subjects and only object pronouns can be objects.” At this point, I will shake my head and laugh in sadness for those poor English speakers who have bought into the prescriptive rules of the mythological Standard English. (All eight are grammatically possible, by the way.)

Similar to Modern German in which all nouns, pronouns, adjectives, and determiners take inflections to indicate grammatical case, English also once had an extensive case system. Unlike Modern English in which word order determines the functions of nouns—the boy kicked the girl and the girl kicked the boy clearly have different meanings because of syntax—word order of Old English was much less rigid because of inflections that indicated grammatical case. In Modern English, however, the grammatical functions of nouns can only be determined by examining the order of words within a sentence.

For example, the noun phrase the chicken is just a noun phrase without any function outside the context of a sentence. However, if the noun phrase the chicken is placed into one of the following sentences, a wolf ate the chicken or the chicken ate a wolf, the noun phrase gains a grammatical function as either the direct object or the subject. Depending on the order of words, the meanings of the two sentences are drastically different. Either a large canine consumed the feathered animal, or the feathered animal (albeit amazingly) consumed a large canine. In Old English, word order was not as important to the central meaning of such as sentence because the words for the chicken and a wolf would have taken inflections that signified their functions as subjects and direct objects.

I, however, must argue that the English case system has long since been dead. First, two of the English personal pronouns have the same form in both the subject and the object position: you and it. The two sentences you saw it and it saw you differ greatly in meaning but contain pronouns with the exact same form regardless of grammatical function. The subject pronouns you and it are the same in spelling and pronunciation as the object pronouns you and it. The second person and third person singular neuter pronouns no longer have separate forms for nominative versus accusative or dative functions.

The English Case System Is Dead

Both Friedrich Nietzsche and Time once controversially proclaimed that God is dead. I, too, somewhat controversially proclaim that the English case system is good and dead and has been so for a long time. Although prescriptivism vehemently fights for the use of subject pronouns in subject positions only and object pronouns in object positions only, actual use of the English language proves otherwise. All eight sentences are grammatically possible. The English case system is dead.