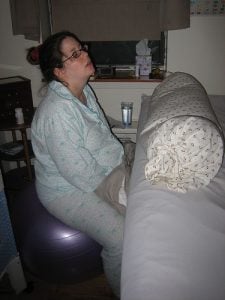 Women — including women with an epidural — who use a peanut-shaped exercise ball during labor give birth more quickly and are half as likely to undergo a cesarean section than women who do not use the ball, says a new study by nurse researchers at Banner Health published in the Journal of Perinatal Education.

Epidurals block the nerve impulses from the lower spinal segments, which results in decreased sensation in the lower half of the body. Epidurals are the most commonly used method of pain relief for labor in the United States. However, the pain-blocking procedure can prolong labor, increasing the risk for a cesarean section.

Cesarean sections, which can increase the risk of infection and hemorrhage among mothers, currently account for more than 30 percent of births in the United States. Compared with vaginal births, cesarean births typically result in higher health care costs as well as longer recovery times for mothers and future health risks for babies.

The present nurse-led randomized, controlled trial conducted at Banner Good Samaritan Medical Center, a Phoenix hospital part of nonprofit Banner Health, examined the differences between women who used a peanut ball during labor and women who did not

The study found that the use of exercise balls during labor can help women who use an epidural, and who are subsequently are usually limited in the number and capacity to try different position changes, offers multiple benefits including decreased labor time, increased circulation, fetal descent, and improved quality of contractions. Ultimately, using a peanut ball resulted in decreased length of labor and increased rate of vaginal birth.

Comments Christina Tussey, MSN, RN, CNS, lead author of the study and a clinical nurse specialist at Banner Health, on the findings of the study:

“The peanut ball is a low-risk, low-cost nursing intervention that promotes positive labor outcomes and reduces the duration of the delivery process. Of U.S. women who require a primary cesarean surgery, more than 90 percent will have a subsequent repeat cesarean. Women utilizing the peanut ball during labor had a statistically lower rate of needing a cesarean section for delivery thus reducing the risks associated the primary cesarean surgery and implications for subsequent pregnancies.”

Women who used a peanut ball had significantly shorter labor periods during the first and second stages. The findings suggest that using an exercise ball enhances labor by optimally positioning the fetus to increase the pelvic diameter and allow more room for fetal descent.

Comments Emily Botsios, BSN, RN, an author of the study and clinical nurse at Banner Health:

“Organizations have begun assuming responsibility for limiting elective procedures, especially C-sections, recognizing that the best outcomes overall for both mother and child occur in facilities with cesarean surgery rates in the 5-10% range. Our findings show that mothers can ask for a risk-free option to help promote labor when receiving an epidural.  Based on the success of the study, we have implemented use of the peanut ball in all labor and delivery units across Banner Health.”

Another recent study found that birth method may affect the way in which gut bacteria mature.