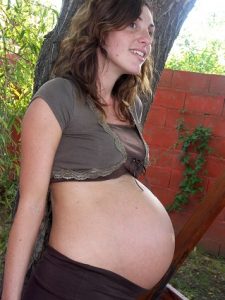 Gaining more than the recommended amount of weight during pregnancy increases the risk of health problems such as hypertension, gestational diabetes, premature birth, and Cesarean section. Additionally, excessive maternal weight gain also negatively affects the baby, increasing the risk of infants being overweight by 30 percent. Fortunately, exercising during pregnancy reduces excessive weight gain and the possibility of suffering from associated problems.

The present study as published in the Mayo Clinic Proceedings studied the effects of supervised light- to moderate-intensity exercise prior to the ninth week of pregnancy on maternal weight gain. The study took place between 2007 and 2011 and involved 962 pregnant women.

According to the study, women who exercised during the first two-thirds of the first trimester of pregnancy gained less weight overall and were less likely to exceed the recommended weight gain levels. Normal weight women should gain 25 to 35 pounds during pregnancy, overweight women 15 to 25 pounds, and obese women 11 to 20 pounds. Women who followed the exercise regime were 40 percent less likely to gain excessive weight during pregnancy.

The benefits of exercise during early pregnancy are especially significant for women of normal weight compared to overweight and obese women. Although exercise is still healthy for pregnant women considered overweight or obese, women of normal weight benefited the most from exercising during pregnancy. The researchers did not find any significant treatment effect in overweight or obese women in the study.

However, for overweight and obese pregnant women, exercising three times a week reduces the risk of having a baby with macrosomia (high birth weight) by 86 percent.

“[T]hanks to the joint work of professionals from the fields of Sports Science and Medicine, we have been able to demonstrate the importance of correct exercising habits, supervised and directed during the pregnancy. In this sense, there is still a lot to do, since we believe that the benefits of programmed physical exercise during pregnancy can even affect the infant’s first years of life. Recent scientific evidence allows us to consider this idea. For this, new studies are needed to research the influence of gestational exercise on maternal, fetal and child parameters; it would be a great mistake not to extend this type of research, using more extensive and ambitious clinical tests. This is only the tip of the iceberg.”

The results of the present study underscore the importance of maintaining a healthy weight and exercising during pregnancy.