Connect
To Top
NewsDecember 26, 2014 This post may contain affiliate links 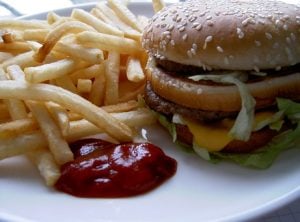 Eating fast food too often can cause health problems such as obesity. Now a new study links the consumption of fast food to academic growth, finding that children who eat a lot of fast food in fifth grade perform poorer on math, reading, and science tests in eighth grade.

Published in the journal Clinical Pediatrics, the research led by Katy Purtell, assistant professor of human sciences at Ohio State University, sought to examine the associations between fast food consumption and the academic growth. The study used direct assessments of academic achievement and child-reported fast food consumption from a nationally representative sample of 11,740  kindergartners in the 1998 to 99 school year followed through eighth grade.

In addition to completing the questionnaires, the children also completed tests in reading, math, and science in fifth grade and eighth grade.

The association between fast food consumption and lower academic performance remained even after the researchers controlled for compounding factors such as exercise, television viewing time, familial socioeconomic status, other food consumption, and school and neighborhood characteristics.

Comments Purtell on the findings:

“There’s a lot of evidence that fast-food consumption is linked to childhood obesity, but the problems don’t end there. Relying too much on fast food could hurt how well children do in the classroom.

“We’re not saying that parents should never feed their children fast food, but these results suggest fast-food consumption should be limited as much as possible.”

The researchers did not investigate the cause of the link between higher fast food consumption and lower academic performance. However, past studies have concluded that fast food lacks nutrients such as iron associated with cognitive development. High-fat and high-sugar diets, which include fast food diets, may also impair memory and learning skills, possibly resulting in the lower academic performances among children who consume a lot of fast food.