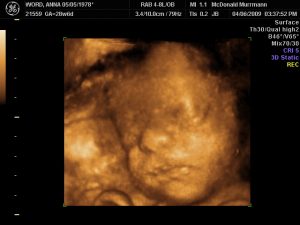 Once only a tool that could provide doctors with vital information about the condition of an unborn baby, ultrasounds have entered the realm of commercialism with facilities around the United States offering 3D fetal images of unborn children as keepsakes. But neither fetal ultrasound imaging nor Doppler fetal ultrasound heartbeat monitors are intended for over-the-counter (OTC) sale or use, and the Food and Drug Administration (FDA) issued a statement in January strongly discouraging the use of both for creating fetal keepsake images and videos.

The FDA considers ultrasound generally safe, but both ultrasound imaging and fetal Doppler are prescription devices intended for use by health care professionals.

Says Shahram Vaezy, Ph.D., an FDA biomedical engineer, “Proper use of ultrasound equipment pursuant to a prescription ensures that a woman will receive professional care that contributes to her health and to the health of her fetus.”

Although considered safe, ultrasound can raise the temperature of exposed tissue and can create small bubbles known as cavitation.

“Although there is a lack of evidence of any harm due to ultrasound imaging and heartbeat monitors, prudent use of these devices by trained health care providers is important. Ultrasound can heat tissues slightly, and in some cases, it can also produce very small bubbles (cavitation) in some tissues.”

The long-term effects of tissue heating and cavitation from ultrasound are unknown.

Length of exposure to ultrasound may also increase the potential for negative health effects. Some commercial facilities have used the ultrasound machine for as long as an hour to obtain a video of the fetus.

“When the product is purchased over the counter and used without consultation with a health care professional taking care of the pregnant woman, there is no oversight of how the device is used. Also, there is little or no medical benefit expected from the exposure. Furthermore, the number of sessions or the length of a session in scanning a fetus is uncontrolled, and that increases the potential for harm to the fetus and eventually the mother.”

While recognizing that fetal imaging can promote bonding between parents and unborn babies, the FDA also points out that such opportunities are routinely provided during prenatal care from trained health care professionals.

“All of a sudden, it’s not a black and white: you see the features, you see a baby’s face and the biggest thing here is the nose. Everybody talks about the nose. ‘Who’s nose is that? Is it daddy’s nose? Is it mommy’s nose?”

Counters board-certified OBGYN Dr. Rebecca Brightman, “I know that they are exciting, but I don’t think women should abuse the medical technology for their entertainment purposes.”

One state, Connecticut, has already banned the use of prenatal ultrasounds for any non-medical use.