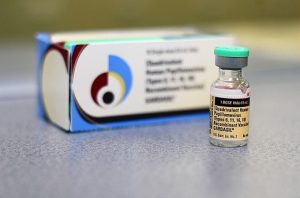 Two vaccines for the human papillomavirus virus (HPV) exist: Cervarix and Gardasil. The Centers for Disease Control and Prevention (CDC) currently recommends that the vaccine be given as a series of three shots over six months. Although the main goal of the HPV vaccine is to prevent cervical cancer, the vaccine also prevents other health problems genital warts. Now a new study published in the journal JAMA suggests that fewer than the three recommended doses of the HPV vaccine reduce the risk of genital warts in girls.

Genital warts are a sexually transmitted disease characterized by soft growths on the skin and mucus membranes of the genitals including the penis, vulva, urethra, vagina, cervix, and anus. HPV causes genital warts.

In a recent study from Sweden, researchers led by Eva Herweijer of the Karolinska Institutet in Stockholm investigated the association between the Gardasil quadrivalent HPV vaccine and the first occurrence of genital warts in relation to vaccine dose in a population-based setting.

A total of  1,045,165 girls and young women between the ages of 10 and 24 years old living in Sweden participated in the study. The researchers followed up with the participants for 2006 and 2010, collecting data on HPV vaccination and first occurrence of genital warts.

The girls and young women who received all three doses of the HPV vaccine had the lowest risk of developing genital warts. However, the participants who received only two doses also had a decreased risk.

Most notably, the different in reduced risk between two doses and three doses was small. Explain the researchers, “The number of [genital warts] cases prevented by three doses vs. two doses was 59 cases per 100,000 person-years, which is a small difference.”

In other words, fewer than the recommended three doses of the HPV vaccine still offer protection against genital warts.

The researchers do warn that the present study assess only the association of reduced genital warts risk and the HPV vaccine, not cervical cancer risk.