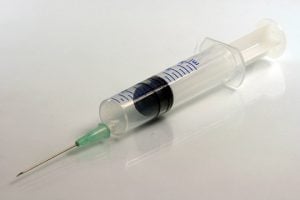 In addition to children under the age of 2 and individuals with underlying health problems, seniors over the age of 60 are at greatest risk for influenza (respiratory flu). However, a new review published in the journal The Lancet Infectious Diseases concludes that the flu shot, or influenza vaccine, effectively protects seniors against the flu during epidemics or widespread outbreaks.

Influenza, or the flu, is a contagious respiratory illness caused by various flu viruses. Symptoms of the flu include fever, chills, cough, sore throat, runny or stuffy nose, muscle or body aches, headaches, and fatigue. Complications of the flu include pneumonia, bronchitis, sinus and ear infections, and death. Influenza is not the same as the stomach flu, which is characterized by nausea, vomiting, and diarrhea. The seasonal flu vaccine protects against the respiratory flu.

For the review, researchers led by senior investigator Edwin Van den Heuvel, a professor in the Department of Epidemiology at the University of Groningen in the Netherlands, analyzed thirty-five case-control studies of “test-negative design” that assessed the effectiveness of the flu shot against laboratory confirmed influenza in community-dwelling individuals age 60 and older.

The researchers chose only case-control studies of “test-negative design” to avoid bias that might make the flu shot appear more effective than in actuality. All the studies included in the review compared seniors with similar health care-seeking behavior.

According to the review, seniors over the age of 60 who received the flu shot were 28 to 58 percent less likely to contract the flu during regional or widespread seasonal flu activity regardless of whether the vaccine was a full match to circulating viruses.

In other words, the influenza vaccine provides significant protection against the disease among seniors during epidemics or widespread outbreaks.

As the researchers conclude, “Efforts should be renewed worldwide to further increase uptake of the influenza vaccine in the elderly population.”

Another study from earlier in the year also concluded that the flu shot may reduce the risk of stroke by almost a quarter.