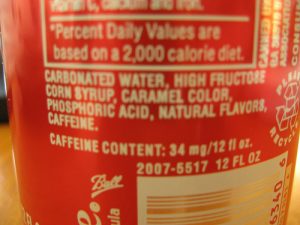 Women may want to avoid high-fructose corn syrup. According to a new study published in The Journal of Nutrition from researchers at the University of Utah, the fructose-glucose mixture found in high-fructose corn syrup reduced both the reproduction and lifespan of female rodents when consumed in doses proportional to the diet of many Americans when compared with sucrose, or table sugar.

Experts estimate that around 13 to 25 percent of Americans consume a diet in which 25 percent or more of calories come from added sugars including high-fructose corn syrup and sucrose.

Explains James Ruff, first study author and a postdoctoral fellow in biology, on the importance of the present study:

“Our previous work and plenty of other studies have shown that added sugar in general is bad for your health. So first, reduce added sugar across the board. Then worry about the type of sugar, and decrease consumption of products with high-fructose corn syrup.”

“[When] the diabetes-obesity-metabolic syndrome epidemics started in the mid-1970s, they corresponded with both a general increase in consumption of added sugar and the switchover from sucrose being the main added sugar in the American diet to high-fructose corn syrup making up half our sugar intake.”

For the study, the researchers used a rodent model in which a total of 160 unrelated house-type mice consumed a healthy diet with 25 percent of total calories coming from either added fructose and glucose monosaccharides or from sucrose for the duration of 40 weeks. The researchers then released the mice into a controlled environment for 32 weeks of observation during which all mice consumed a fructose-glucose monosaccharide diet.

According to the study, female mice who consumed the fructose-glucose diet from the beginning of the study had death rates 1.87 times higher than females who had been on the sucrose diet. Females in the fructose-glucose  group also produced approximately 26.4% fewer offspring than the females in sucrose group.

The researchers found no differences in the reproduction, survival, and territorial behavior among the male mice on either diet.

Compared with sucrose, the fructose-glucose in high-fructose corn syrup appears toxic to female, but not male, mice.

However, the researchers do caution that previous studies have found negative effects of a fructose-glucose diet on male mice. Additionally, the lack of differences between the two groups of male mice in the present study indicates that “sucrose is as bad for males as high-fructose corn syrup.”

Professor Potts believes that “female mice that ate the fructose-glucose mixture may be more likely to die than male mice because they undergo a bigger metabolic ‘energy crunch’ during such studies: on the day they give birth, they mate and conceive the next litter, so they are nursing their first litter while gestating a second litter.”

“So we speculate that the different sugars could favor different microbes in the guts of mice. Other research has shown differences in bacterial communities in the gut to be associated with metabolic diseases in rodents and in humans. It’s possible one form of sugar causes more bacteria to get across your gut than another.”

A 2014 study found that fruit juice is as bad as sugar-sweetened drinks because of a comparably high sugar content, adding to the growing evidence of the harms of the high sugar content of many American diets.