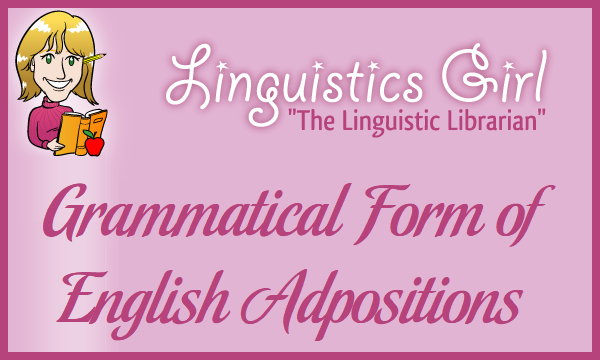 Adpositions are traditionally defined by notional grammars as words that “link to other words, phrases, and clauses” and that “express spatial or temporal relations.” Belonging to a grammatical category consisting of a small closed word set, adpositions show no inflectional variation. The two types of adpositions in the English language are prepositions and postpositions.

Some grammars also include a subclass under simple prepositions called -ing prepositions. Prepositions ending with -ing are often difficult to identify because their form is similar to the present participle of English verbs but can be distinguished from similar forms with different functions by the existence of a noun phrases as their complements as well as the function of the prepositional phrase. For example:

Postpositions are a subcategory of adpositions in which the complement precedes the postposition within a postpositional phrase. For example:

Adpositions are words that “link to other words, phrases, and clauses” and that “express spatial or temporal relations.” Both prepositions and postpositions are subcategories of adpositions in the English language.

Adpositions are words that “link to other words, phrases, and clauses” and that “express spatial or temporal relations.”

Adposition is a grammatical form.

Adpositions belong to a closed class of function words that lack any variation in internal structure.