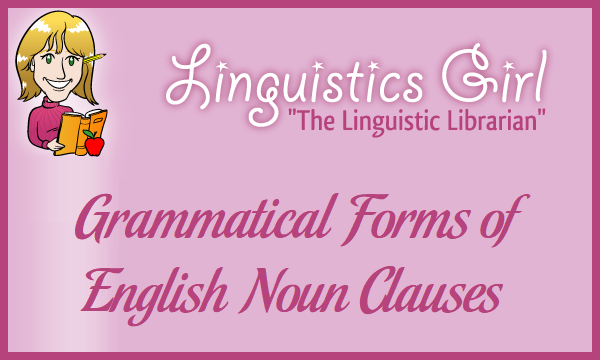 Similar to the noun and noun phrase in grammatical function, a noun clause is a dependent or subordinate clause that consists of a subordinating conjunction followed by a clause and that performs a nominal function. Some grammars use the term nominal clause for noun clauses.

Additionally, noun clauses may be either finite or nonfinite in form.

Noun clauses in English grammar are subordinate clauses that consist of a subordinating conjunction followed by a clause and that perform nominal grammatical functions.

1 Some grammars consider constructions such as you to wash your hands as a direct object (you) followed by an object complement (to wash your hands). I disagree.
2 Some grammars consider constructions such as him reciting the alphabet as a noun phrase (pronoun him) followed by a modifier (reciting the alphabet). I again disagree.
3 Some grammars also consider the form of the noun clause in sentences like Grandma demands that Espen eat his vegetables a finite noun clause with a verb conjugated into the subjunctive mood.

Noun clause is a grammatical form.

The subordinating conjunctions in English that introduce noun clauses are that, Ø, if, whether, wh– words, and wh-ever words.

Noun clauses may be formed from declarative or interrogative sentences.