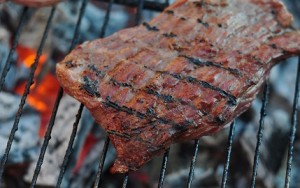 Eating grilled or broiled meat may increase the risk of Alzheimer’s disease and diabetes, suggests new research from the Icahn School of Medicine at Mount Sinai in New York, New York as published in the Proceedings of the National Academy of Sciences.

Grilled and broiled meat, or heat-processed meat, contains high levels of advanced glycation endproducts (AGEs). AGEs are substances that may cause the development or worsening of many degenerative diseases such as diabetes, Alzheimer’s disease, atherosclerosis, and chronic renal failure by speeding up oxidative damage to cells and altering normal cell behavior.

For the present study, the researchers used a rodent model in which three groups of mice were fed diets that consisted of varying levels of AGEs.

According to the study, the mice that consumed the diets highest in AGEs exhibited the highest levels of AGEs in the brain. High levels of AGEs suppressed a substance called SIRT1 in the blood and brain tissue of the mice. SIRT1 is responsible for regulating neuronal, immune, and endocrine function. Low levels of SIRT1 are present in individuals with diabetes.

The mice with the highest levels of AGEs also developed metabolic syndrome, a precursor to metabolic disorders such as diabetes.

States Helen Vlassara, MD, Professor and Director of the Division of Experimental Diabetes and Aging in the Brookdale Department of Geriatrics at Mount Sinai:

“Age-associated dementia or Alzheimer’s disease is currently epidemic in our society and is closely linked to diabetes. Our studies of both animals and human subjects confirm that AGE-rich foods are a lifestyle-driven reality with major health implications. The findings point to an easily achievable goal that could reduce the risk of these conditions through the consumption of non-AGE-rich foods, for example, foods that cooked or processed under lower heat levels and in the presence of more water – cooking methods employed for centuries.”

“While more research needs to be done to discover the exact connection of food AGEs to metabolic and neurological disorders, the new findings again emphasize the importance of not just what we eat, but also how we prepare what we eat. By cutting AGEs, we bolster the body’s own natural defenses against Alzheimer’s disease as well as diabetes.”

Eating meat is also linked to an increased risk of developing cancer. However, another recent study concluded that diets high in fiber may protect against obesity and diabetes.