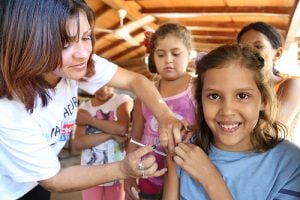 As the United States and California in particular grapple with the current measles outbreak, California public health officials are urging measles vaccination for adults and children before families travel internationally over spring school break.

As health officials search for the origin of the measles outbreak that began at Disneyland at the end of December, detective work indicates that the virus most likely originated in the Philippines. A similar outbreak that sickened more than 380 people in Ohio last year also began after the return of an Amish humanitarian aid worker from the country.

Because of widespread use of the combination measles-mumps-rubella (MMR) vaccine in the United States, most cases and outbreaks originate from travelers bringing the virus into the country from abroad. The California Department of Public Health thus urges vaccination for all unvaccinated individuals who plan to travel out of the country.

Commens Dr. Gil Chavez, chief epidemiologist for the state of California, in a written statement”

“Measles is extremely contagious and can be very serious. The best way to protect yourself and your family against measles is with the Measles Mumps and Rubella (MMR) vaccination, which is 97 percent effective after two doses.

“Vaccination is especially important for those who plan to travel internationally, which places them at high risk of getting the disease and spreading it to others after they come home.”

California health officials are also urging residents returning from travel overseas to watch for symptoms of measles. Measles is a highly contagious disease caused by the measles virus that is spread through contaminated droplets from the nose, mouth, or throat of an infected individual. Coughing and sneezing are the most common ways in which the measles virus is passed from person to person. Symptoms of the measles occur eight to ten days after exposure and include bloodshot eyes, cough, fever, sensitivity to light, muscle pain, eye redness and irritation, runny nose, sore throat, tiny white spots inside the mouth, and a telltale rash.

The MMR vaccine, which is up to 99 percent effective, is the only effective means of preventing infection with the measles virus. The Centers for Disease Control and Prevention (CDC) currently recommends all children receive two doses of the MMR vaccine, with the first dose given between 12 and 15 months and the second dose between 4 and 6 years. Unvaccinated adults who are not already immune to measles should also receive two doses of the MMR vaccine spaced 28 days apart. Infants under the age of 12 months who cannot receive the first dose of the vaccine are especially susceptible to the illness.