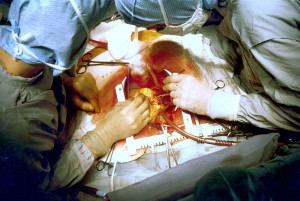 Women who give birth to full term but low birth weight babies are at an increased risk for developing heart disease later in life, says a recent study published in PLoS One.

To determine a link between babies who are born small for their gestational age and their mother’s risk for developing ischemic heart disease, researchers at the University of Texas Medical Branch (UTMB) at Galveston looked at data from a nationally representative sample of more than 6,600 women who participated in The National Health and Nutrition Examination Survey between the years 1999 and 2006.

Low birth weight was defined as a baby who weighed than five pounds and eight ounces at 37 weeks of gestation or later. Other information collected on the women included factors such as the woman’s history of heart disease, stroke, hypertension, diabetes, and cancer as well as smoking status, alcohol use, dietary fiber intake, body mass index, activity levels, and triglyceride and cholesterol levels.

The results of this study surprised researchers. As Dr. Radek Bukowski, professor of obstetrics and gynecology in the Division of Maternal-Fetal Medicine at UTMB, comments:

We were especially surprised that when we adjusted for family medical history and known risk factors, such as smoking – which significantly increases the risk of heart disease and low birth weight infants – SGA remained a powerful independent risk factor for heart disease in the mothers.

Although the reason for the link between giving birth to a full term but low birth weight baby and a woman’s increased risk for developing heart disease has not yet been determined, researchers are conjecturing that the reason could be due to “low concentrations of angiogenic factors (which stimulate blood vessel growth and repair), such as placental growth factor in maternal circulation.”

Heart disease is currently the leading cause of death among American women. The results of this study could help doctors better screen for women who are at an increased risk for developing ischemic heart disease.

A Mothers Risk For Heart Disease Increases If She Give Birth To A Small Full-Term Infant: http://www.medicalnewstoday.com/releases/242917.php