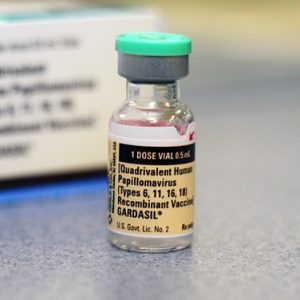 Human papillomavirus (HPV) is a virus that affects the skin and the moist membranes of the body such as the cervix, anus, mouth, and throat. Although most HPV infections clear without any harmful effects, the virus also causes genital warts and cancers of the cervix, vagina, vulva, anus, penis, and throat.

Two vaccines for the human papillomavirus virus (HPV) exist: Cervarix and Gardasil. Gardasil is a quadrivalent vaccine, protecting against four types of HPV. Cervaris is a bivalent vaccine, protecting against two types of HPV. The Centers for Disease Control and Prevention (CDC) in the United States currently recommends that the HPV vaccine be given as a series of three shots over six months.

Participants in the study included women eligible for free vaccination (girl and women between the ages of 12 and 26 years in 2007) and women receiving their first cervical smear test between April 2007 and March 2011. The researchers divided the women into three groups: women with high-grade precancerous abnormalities, women with other abnormalities, and women with negative smear tests.

Effectiveness of the HPV vaccine against cervical abnormalities is also higher among women without previous abnormal test results, underscoring the importance of administering the vaccine to girls starting between the ages of 12 and 13 years old.

“At present, cervical screening will remain necessary in vaccinated populations owing to the relative type specificity of current vaccines. Falling population prevalence of cervical abnormalities will reduce the sensitivity and positive predictive value of cytological testing, and screening programs will need to adapt to maintain their effectiveness. Our data suggest that this task is now becoming more urgent given the relatively rapid impact of the vaccine on disease in the real world setting.”

Another recent study suggests that two doses of the HPV vaccine provide protection against genital warts.