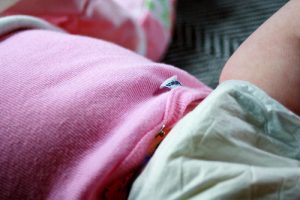 As research continues to reveal the protective benefits of the gut microbiota, a recent study published in the journal Clinical & Experimental Allergy suggests that changes to the mix of gut bacteria of young babies may offer a way to predict the future development of food allergies or asthma.

For the study, researchers from the University of Alberta and University of Manitoba in Canada sought to explore the association between infant gut microbiota and food sensitization.

Of the total babies in the study, twelve (7.2 percent) developed food sensitivities at age 1.

More importantly, the researchers observed that bacteria present early in life predicted the development of food sensitization at 12 months. Infants with less diverse gut bacteria at 3 months were more likely to develop sensitivity to certain foods like eggs, milk, and peanuts by age 1.

Comments senior study author Anita Kozyrskyj, professor in the Department of Pediatrics at the University of Alberta, “It is something that one can measure that indicates increased risk of food sensitization by 1 year of age.”

Adds lead author Meghan Azad, assistant professor in the Department of Pediatrics and Child Health at the University of Manitoba, “Ultimately, we hope to develop new ways of preventing or treating allergies, possibly by modifying the gut microbiota.”

As the ratio of Enterobacteriaceae to Bacteroidaceae increased, the risk of food sensitization increased.

The researchers do caution that the findings of the study do not necessarily mean that food sensitive children will progress to having full-blown food allergies later in life.

Additionally, the researchers plan to expand the sample size as data from more participants in the CHILD study  becomes available and to keep following the children for further analysis at ages 3 and 5 years.

Concludes Professor Kozyrskyj, “At the end of the day, we want to know if infants who show changes to normal gut bacteria composition will go on to develop food or other allergies, or even asthma.”

Two other recent studies found that Clostridia, a common class of gut bacteria, provides protection against food allergies and that environmental factors such as gestation duration and birth method may affect the way in which gut bacteria mature.