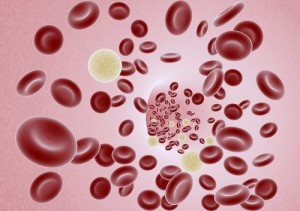 According to the Centers for Disease Control and Prevention (CDC), 795,000 Americans suffer from a stroke each year, resulting in nearly 130,000 deaths annually. Now new research from Imperial College London in the United Kingdom as published in the journal PLOS One suggests that iron deficiency may increase the risk of stroke by making the blood stickier.

The researchers led by Dr. Claire Shovlin, National Heart and Lung Institute at Imperial College London, note that previous research indicates that iron deficiency could be a risk factor for ischemic stroke. Ischemic stroke occurs when a blood clot blocks blood flow in or leading to the brain. Another type of stroke, hemorrhagic stroke, occurs when a blood vessel bursts inside the brain.

To investigate a possible link between iron deficiency and increased stroke risk, the researchers analyzed the iron levels of 497 patients with hereditary hemorrhagic telangiectasia (HHT), a rare disease than can lead to enlarged blood vessels in the lungs. Healthy blood vessels usually filter out small blood clots before the blood travels to the arteries, but, in individuals with HHT, the blood vessels sometimes allow small blood clots to escape to the brain.

Additional research discovered that iron deficiency increases the stickiness of blood platelets, causing the platelets to stick together and form clots.

Comments Dr. Shovlin on the findings, “Since platelets in the blood stick together more if you are short of iron, we think this may explain why being short of iron can lead to strokes, though much more research will be needed to prove this link.”

“The next step is to test whether we can reduce high-risk patients’ chances of having a stroke by treating their iron deficiency. We will be able to look at whether their platelets become less sticky. There are many additional steps from a clot blocking a blood vessel to the final stroke developing, so it is still unclear just how important sticky platelets are to the overall process. We would certainly encourage more studies to investigate this link,” adds Dr. Shovlin.