Although I live in a small town, my family is a farm family. So, when recently offered an opportunity to review two new John Deere preschool toys from John Deere and TOMY, I jumped at the chance. I received a First Animal Puzzle and a Whistle & Go Puppy, which my toddler daughter and I reviewed together. 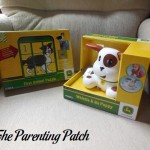 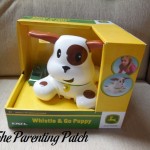 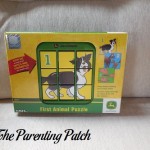 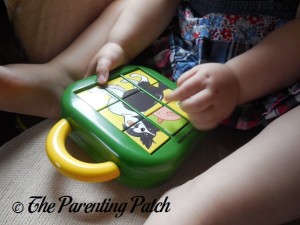 My daughter loves her new First Animal Puzzle from John Deere and TOMY. She loves just randomly flipping through squares and loves even more when her father or I flip all the pieces to create one picture. She is still figuring out how to put the pictures together herself, but, I have no doubt in my mind that she will soon figure out how to work the puzzles herself.

In addition to flipping through the pictures, my daughter also loves pointing out the three different animals. Dogs are one of her favorite animals at the moment, so she absolutely adores the puzzle with the dog. She also likes making pig noises, so the three pigs are also perfect for her. The two horses are also a great addition to her knowledge of animals.

The John Deere First Animal Puzzle retails at $7.99 and is recommended for children ages one and up.

First and foremost, my daughter LOVES the whistles of her new Whistle & Go Puppy. As soon as I handed her the whistle, she blew on that toy for a good ten minutes straight. Once she realized that the puppy moved and stopped when she whistled, she became even more interested. She also loves playing with just the whistle. She will walk around the house whistling and whistling.

One note to pet parents: The whistle may drive your animals crazy. Espen, our older dog, is afraid of the whistling noise. (Then again, he is afraid of everything including his own shadow and the word storm.) Kenobi, on the other hand, went crazy when he heard the whistle. He came running and then ran around the room like a mad pup. He also likes to follow the puppy dog around as the toy dog rolls across the floor. 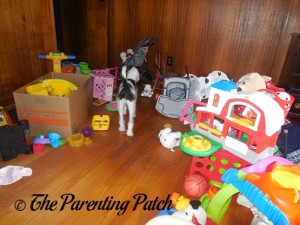 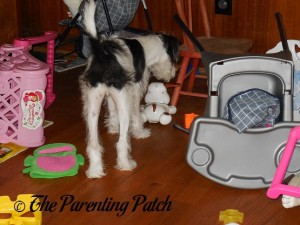